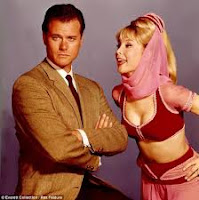 Two weeks ago I talked about Rey on Favorite Character Tuesday. Today I want to go back to my childhood hero who is in many ways Rey's precursor. I was born in 1967 and grew up in the 70s and 80s, so I wasn't exactly inundated with strong, powerful female role models on Television. On Scooby-Doo there were two female characters. The highly intelligent Velma was also a dork, unattractive, and completely useless without her glasses, which were always falling off. Then you had Daphne who was attractive but a completely brainless ditz. The truly interesting characters on the show were, of course, Shaggy and Scooby-Doo, both males. Other TV programs showed me a  called the man "Master" and bowed to his every wish. Darrin on Bewitched makes his powerful wife promise never to do witchcraft and makes sure she washes the dishes by hand inside of with a twitch of her nose. She is almost always the dutiful housewife. I liked both Samantha and Jeannie, but even as a child, I was uncomfortable with them bowing to masculine control.
powerful 2000-year-old genie who 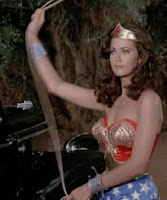 Then Linda Carter as Wonder Woman comes on to the scene in 1975. She may hide her identity in that of a secretary, but she's an Amazonian princess. In the Amazon, the women rule, and they never bow to male authority. Wonder Woman undoes her hair and twirls around, and she is a superhero with a magical golden lasso and bracelets which can deflect bullets. She fights with superhuman strength and ability and never needs to be rescued. As the theme song stated, "All the world is waiting for you, and the power you possess." She flies an invisible plane and defeats the bad guys. She is honored for her power by men, unlike Darrin whose threatened by his wife's strength. Wonder Woman taught me that women can be strong, and I absolutely loved her.

Yes, I know that she was sexually objectified by her skimpy outfit while Superman and Batman are always fully clothed, but that didn't occur to me as a child. Her butt kicking ability, however, did. She wasn't my only influence, but Wonder Woman helped nurtured my feminist consciousness before I even knew what a feminist was. (In my house, they were called "women libbers" and always referred to with disdain.) Heroes like her helped me to throw off the repressive patriarchal values of the culture I grew up in. I owe Wonder Woman a debt I try to repay through the creation of my own female characters.

In the comments, tell me about your childhood hero.