Today, I have a guest author, Mysti Parker's, Christmas story to get you in the Christmas spirit. Just four days away.

The Carpenter's Wife
by Mysti Parker
Her screams jarred the peaceful night. A donkey brayed. From the rafters overhead, startled doves flew away in a burst of annoyed coos and wing beats. The young woman was no stranger to childbirth, having assisted her own mother on many such occasions in their village. But here they had no one to call upon for help. The thought occurred to her that she might die, that the stunning proclamation had been a dream, that their little family was no more important than any other.
Her husband knelt in front of her, holding her knees apart. He didn’t flinch at her cries, nor did he look her in the eye. Only a brief crease in his brow indicated any concern on his part.
She treasured that one gesture, listening to his monotone instructions, straining to hear the slightest hint of his love. “Push. Good. Now breathe.”
The contraction eased. She allowed her head to fall back on the rolled-up horse blanket he’d provided when the pains began. The months had crept along until this night. She thought about the quiet dinners they shared back home. About all the times when he caught her staring at him while he focused on his bread and lentils. Their stagnant marriage teetered on this one event.
She had known all along the doubt remained, but she was so grateful for this man who had taken her in despite everything. He worked tirelessly until his hands blistered and bled. His furniture was highly regarded, yet he never boasted. She admired the pride he took in his creations, and she loved to watch him work. Wood surrendered to his skilled touch. Chisels and saws were like an extension of his limbs. She wanted nothing more than to be the wife he deserved, yet the desire to pick up a doll or chase her younger siblings down the dusty streets still pulled at her heart. And, of course, people still whispered.
Another pain. Then another. Wave after wave. Sweat poured from her brow. The surroundings blurred with every excruciating squeeze. She felt the baby leaving the warmth of her womb, coming closer to the chilly night. Would he be all right? What if something she did while he was in her womb caused him to be stillborn or crippled?
“Push! I see the head. It’s almost over.”
His voice was louder, his eyes wider, sparkling with more excitement than she’d ever seen before. She focused on his face, on the promises of God, and pushed with all her might. 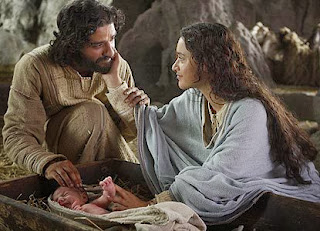 The child came in a sudden whoosh, leaving her weeping with relief and a feeling of emptiness. Her husband caught the baby in the softest bit of cloth he could find, supplied by the innkeeper, perhaps out of guilt for their lowly accommodations.
“It’s a boy!”
“Is he all right?”
The baby cried, easing her fears. Her husband nodded. “Yes, he’s beautiful, like his mother.”


She smiled through her tears at the joy in his voice and his beaming smile. He cut the cord and swaddled him as gently as if he were his own child. Then, he handed the tiny infant to her. She took him in her arms, astonished at how insignificant the boy felt within his wrappings. Red, wrinkly, and bald, he didn’t look like anyone that could save the world. Yet, as her husband wiped tears and nestled close to her side for a better look at their son, she knew that this tiny babe had already resurrected Joseph’s heart. The rest was up to God.
****
This story was published in the anthology Christmas Lites. All proceeds go to the NCADV (National Coalition Against Domestic Violence). Grab your copy on Amazon Kindle for just $3.99. Also, be sure to pick up Christmas Lites II and Christmas Lites III. They make great gifts!!!