Blood Cursed and Other Stories of the Fantastic is Ready

Both the print and ebook versions of my collection are now ready on Amazon. You can order autographed copies from my website: http://jamie-marchant.com/short%20stories.htm
Posted by Unknown at 4:02 PM No comments:

Blood Cursed and Other Tales of The Fantastic 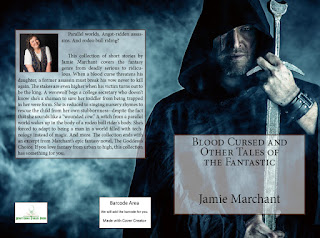 I'm bringing out a collection of my short stories, Blood Cursed and Other Tales of the Fantastic.


This collection of short stories by Jamie Marchant covers the fantasy genre from deadly serious to ridiculous. When a blood curse threatens his daughter, a former assassin must break his vow never to kill again. The stakes are even higher when his victim turns out to be the king. A werewolf begs a college secretary who doesn't know she's a shaman to save her toddler from being trapped in her were form. She is reduced to singing nursery rhymes to rescue the child from her own stubbornness--despite the fact that she sounds like a "wounded cow." A witch from a parallel world wakes up in the body of a rodeo bull rider's body. She's forced to adapt to being a man in a world filled with technology instead of magic. And more. The collection ends with an excerpt from Marchant's epic fantasy novel, The Goddess's Choice. If you love fantasy from urban to high, this collection has something for you.

The kindle version is available for pre-order on Amazon, and the print version will be available soon. https://www.amazon.com/Blood-Cursed-Other-Tales-Fantastic-ebook/dp/B01JNHFVV8/ref=sr_1_1?ie=UTF8&qid=1470341794&sr=8-1&keywords=blood+cursed+and+other+tales#navbar
Posted by Unknown at 1:33 PM No comments: