I thought I'd post a piece of flash fiction I wrote that never found a home.

The Stench
By: Jamie Marchant

That smell. You know the one I mean. The odor of death and decay. It fills my bedroom, making sleep difficult. Kasey hops onto the bed and kneads me, purring loudly. I pet her absentmindedly. She seems so sweet, so innocent, but I know she’s responsible for the aroma. Beneath her soft fur lurks vicious predator. A killer who toys with her prey.
Unable to sleep, I cast off the covers and go to the open luggage closet, fearing a rodent rots at the bottom of the pile of suitcases.
I haul the luggage out piece by piece, struggling not to allow that leaning tower to collapse on top of me. Kasey sniffs at the suitcases. Finally, I lift the last piece, and there lies a chipmunk looking merely as if it’s asleep. No obvious wound marks the body, no visible decay. The only sign of death is the stench.
I understand the law of the jungle, the rules of predator and prey. Some animals must die to give life to others, but this chipmunk’s death profited no one. It did nothing to sustain Kasey’s life. I am complicit in this death, for it is I who rescued Kasey from the humane society. It is I who allows her to roam freely. In rescuing Kasey I prevented one senseless death. But how many more am I responsible for?
Posted by Unknown at 4:35 PM 2 comments:

Demons in the Big Easy will be free on Amazon on Friday, Jan. 18 and Sat., Jan 19. Pick up your free copy, and be sure to write a review. 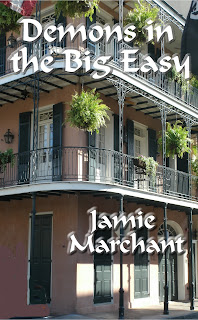 I've just released my self-published novella, Demons in the Big Easy. It's available now on Amazon in Kindle format and will be available in print in a couple of days. If you enjoyed The Goddess's Choice, you should check this one out. It's only just over 50 pages, so it will be a quick read, and I would appreciate any reviews. You can read about it below.


Adventurous in her youth, Cassandra built gateways between Domhan and its parallel realm of Earth. Now she’s too old for that kind of thing. But something is making it easier for demons to pass into Domhan. Not only that, but their behavior becomes inexplicable: whenever Cassandra banishes one, it laughs at her rather than resists, and it promises it will soon devour her essence and that of every resident of her small village. Cassandra is certain such a thing is impossible, for strong wards protect her village.

But then Cassandra’s granddaughter Aine falls through an unstable gateway. Cassandra is the only one within a hundred miles capable of creating a gateway and bringing Aine back. Despite her aching joints, Cassandra goes after her, and the gateway lands her in New Orleans. But something goes wrong with her tracking spell, which indicates Aine exists in four different places at once. As Cassandra struggles to find the true location of her granddaughter in the Big Easy, she discovers the source of the demons’ confidence.  Now, with an unlikely pair of allies—her timid granddaughter and a homeless man who may or may not be crazy—she has to not only save her granddaughter but also prevent both Domhan and Earth from being overrun by demons.