I was a bit disturbed when I read the following article from Forbes: Fantasy Foods. A food company is attempting to create food from fiction that fans want to eat. They serve this food at New York's comic con, but this is certainly sacrilege, isn't it?  Jellybelly tried to make Bertie Botts Every Flavor

Beans, and that was flat out wrong. They couldn't make every flavor. They don't have magic. Yes, they made some unusual flavors, but really they were just Jellybellies with new packaging. While reading Harry Potter to my son (and yes, I read the first four books to him nine times), we both would salivate over butter bear. It sounds so smooth and tasty. My son and I both craved one, but no one without magic should try to make it. No real drink to leave up to the imagined deliciousness of butter beer. And Meadow cream from the Redwall books? One 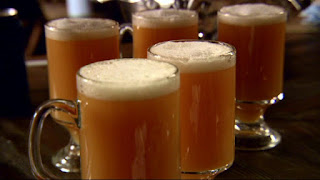 shouldn't even try to make the mouth water flavor of this imaginary food. Reading the feasts in Redwall would set both of our stomachs rumbling, but any attempt to reproduce them in the real world, couldn't be anything other than disappointing.

What do you think? Should butter beer exist?
Posted by Unknown at 3:00 AM