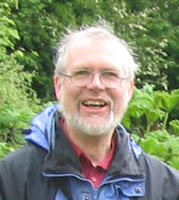 Alan Denham, born and raised in north London (the original one, in England).  Grammar school, then University of Aston in Birmingham, combined degree in geology and chemistry (just!).  Nine months in industry convinced me that I didn’t like it, so I went into teaching.  In those days a science degree was qualification enough to become a secondary school teacher, which I did for a year and a half before deciding to get properly trained and go into junior schools.  That worked well, but sadly I eventually ran into a pair of bullying bosses – a common enough story, but it still hurts!  So I went back to University, took a Masters degree in computing and switched to adult education.
In parallel with all that, I married but had no kids (we kept big dogs instead), and I acquired some woodworking skills, principally carving – and occasionally wrote in what little spare time I still had (e.g. when it was too cold to go into the workshop). 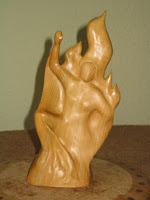 How much is ‘a little’?  I am recently retired, having spent all but a year or so of my career in
education of one form or another – mostly teaching children around ages 9-13, but my full range of experience is much wider – infants to adults in a wide range of backgrounds, abilities, and educational levels.   Working mostly with ‘Middle Years’ children, I tended to be more a generalist than a specialist, but my official specialism started off as ‘general science’ and later moved into computers.
Now I am retired I get involved with a lot of things, but my two main hobbies are woodcarving (http://www.coquetdale.org.uk/artists.php?id=117) and writing.

2.      What made you want to become a writer?
A challenge from a friend.  I have told this one often, but it bears telling again.  So far, I have written mostly as half of a team.  Many years ago my old friend Graham decided to try his hand at writing and produced a lengthy tome that wasn’t publishable material, but showed promise.  He wouldn’t let me work on it for him, so I tried my hand on my own.  It was harder than I thought, and the results were awful!  I showed it to Graham, mostly as grudging acknowledgement that he was rather better at this game than I was – but he grabbed it with both hands, went off and hid for a month, then sent it back – doubled in length, with a few extra characters, and showing a LOT of promise!

It went on from there, mostly as a sort of private joke between friends.  Over several years we found we could work together pretty well; I plan the outlines and the big scenes; he fills in some characterisation and overdoes the world-building.  Then we argue, but the final outcome is usually better than either of us could have done on our own.

After doing that for nearly 25 years, we reckoned we had come up with something publishable, just about the same time that electronic self-publishing became viable – so we did.

3.      Do you think people have misconceptions about the speculative fiction? Why do you think it is a worthwhile genre?
I have been a reader of SF and some Fantasy since I first became aware of the genre – before I could even spell ‘genre’! These areas thrive on simple storytelling.  OK, all books need to have a good story, but what do you add?  Crime and adventure (and war, and westerns) add excitement and action – sometimes so much that the actual story gets so deeply buried it ceases to be important.  That is generally not to my taste!  More literary work adds intense studies of the human condition – and becomes very erudite, and (for me) sometimes requires considerable effort to read.  Again, not to my taste!  Romance? Definitely not to my taste!  F/SF takes a good story and uses it as a vehicle for looking at society, changed in some way – add more technology, or some magic, or some other viewpoint outside familiar human attitudes, and see what happens.  SF can warn us about mis-use of science and technology (examples too numerous to quote here!), and Fantasy can remind us that we are a social animal and need our society around us, and society needs rules.  Change those rules too much, or too fast, or in the wrong way, and the society is in trouble!

For all that, I return to my original point – F/SF is basically about simple storytelling, and that has been at the core of society pretty well since the cave-men invented language.

4.      What is the biggest surprise that you experienced after becoming a writer?
Say ‘during’ rather than ‘after’ – it is the amount of work!  The ideas come, and then they grow – but when I start to write them, I get absorbed in the details, and things wander off course and need to be dragged back into line – or the story has to be redefined to fit what the details require.  Seeing the whole and seeing the details and keeping them together needs a lot more effort than I thought when I first started!  Also – I used to be pretty good at English, but years of seeing the same mistakes over and over in children’s work has left me more familiar with common mistakes than with correct spellings, grammar, etc!

5.      Of all the characters you have created, which is your favorite and why?
Cormell, from Shades of Smoke.
There are two threads here.  The first is that Graham and I were looking for an agent without much success, and we thought writing some short stories and getting them into magazines might raise our profile and lead to a breakthrough.  So we sat outside a pub on a beautiful warm day and over the course of two pints came up with three short story ideas.  But one of them refused to stay as a short story and became “Shades of Smoke,” probably the best thing we have written yet.

The other thread is a book (or it might have been just a short story) that I read about 50 years ago.  Poul Anderson, I think, though I have never seen it since and can’t be sure.  In one small scene near the start a character is manipulating the smoke from his cigar, making pictures.  The idea stuck!
Cormell is introduced as a young lad, about 11 or 12, with an unrecognised talent.  We didn’t want to do a JK Rowling, so we ran him through school/college in about three pages, and then wrote him as a young man, freshly qualified (Journeyman Illusionist), discovering his world, and seeking revenge for the murder of his parents.  Fair justification, we thought, in a world with little law and no effective police force.  To get that revenge he has to use his particular talent, which is a very weak and structured form of magic, in some subtle ways – and that is just the opening chapters.  If you want to know more, get the sample from Amazon!

6.      Tell us a little about your plans for the future.  Do you have any other books in the works?
This is where it all goes wrong.  Graham and I have recently had some arguments about where the stories are going – so the partnership is in trouble!  Maybe we can resolve it, maybe not.  If not, then Graham has some historical work that he has done on his own, and I am working on some crime on my own, so we may well continue independently.  I also have some Fantasy that no longer fits the world Graham and I created, so I may rewrite it to stand alone.  And the crime I am working on at present is something I started a few years ago, mostly as therapy!  I ran into a bullying boss at school, and that part of my career took a nasty knock, so while I was off sick I started writing my boss as the victim of some horrendous murder attempts.  It helped save me from trying one for real!  That was nearly 20 years ago, and the framework I wrote at the time needs a lot of updating – or some historical context to establish a timeframe, and it might be easier if I push it back a decade or so . . . lots of work, but you never know, it might come out right.

Ever fancied being a magician? In a wild and dangerous world? Your parents have been murdered, your childhood sweetheart stolen into slavery. You are embroiled with brigands, assassins, and a serial killer...But you are a magician, remember? You can conjure really good pictures in smoke...

‘My robe?’ the priest asked, puzzled.

‘As a deception to lure in the murderer,’ Marchan half explained.

As soon as the door was shut, Marchan turned to Cormell.

‘Give me a few moments,’ Cormell gasped, ‘I still have to get my breath back.’

Marchan wasn’t even breathing hard.  He scowled at him.  ‘We need it ready when Arradon arrives,’ he urged.

Cormell nodded, and selected some thin but fresh wood.  Within a short time it was smoking strongly.  Marchan draped the priest’s robe over the back of the cushioned chair and shifted it around so it was facing almost directly away from the door.

Cormell added the compounds and began to work the smoke.  Within a few moments he had a human figure, but he was still recovering from his run.  Giving it solidity and proper appearance was going to take longer than usual!

There were noises in the street outside, as of drunks staggering past.

‘He’s here!  First attempt,’ hissed Marchan.  ‘He’ll have moved on because there are people around.  My people.  Make haste!’

Cormell concentrated.  The figure solidified into a likeness of the priest, and he very carefully seated it in the chair before the fire, mostly facing away from the door, but with the head half turned as if turning to look over his shoulder.  Marchan went to the window and whistled a double note, then retreated into the shadows behind the door.  Cormell pressed himself back into the alcove beyond the fire hearth and held his breath.   Then they waited.

There was a crushing silence.  A log crackled on the fire.

Doubt began to gnaw at Cormell, as well as the need to breathe.  Had Marchan’s people frightened Arradon off?

There was the sound of a footfall on the step.  A knock on the door.

‘Who is it?’ Marchan called out, muffling his voice.

‘Priest, I must speak with you,’ came a voice from outside.

There was a click and a creak as the door began to open - then suddenly it was flung wide.  Arradon leapt into the room, his face contorted into a ferocious snarl, and swung a cosh with all his strength at the head of Cormell’s illusion - and staggered off balance as it instantly dissolved into smoke.  He sprawled over the chair.

Before Arradon could regain his feet Marchan had stepped forward with a blade raised where Arradon could see it, and Arradon dropped the garrotte he had been carrying in his other hand.
‘Caught in the act!’ hissed Marchan triumphantly.  ‘You’re mine!’

If you like what you've seen, you can buy the novel on Amazon.