The Handmaid's Tale, Dystopic Fiction at its Best 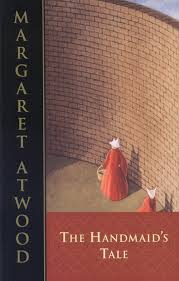 I just finished teaching the Handmaid's Tale (1985) by Margaret Atwood to my American Literature classes. It's a dystopia set in near future United States, which has suffered a coup from the religious right. The Sons of Jacob have implemented a society based on a strict literal interpretation of the Bible. Women can't work or read. Gender Traitors (homosexuals) are executed. Sex is for procreative purposes only. Etc. Most of my students enjoyed the majority of the book, but were disappointed in the ending. The ending is typical of a post-modern novel, and Offred's fate is ambiguous. Offred also completely fails to be heroic. She won't join the resistance or help its cause despite the fact she hates what has happened to her world. She doesn't want to die or be tortured or any of the other horrific fates that the government of Gilead has in store for dissenters. Atwood's point in writing Offred in this manner is to comment on the human tendency to tolerate evil. Even if we think something is wrong, most of us are afraid to rock the boat. France under the Nazis is a good example of this. While the French Resistance did continue to fight, the majority of the French population accepted the occupation of their country by an evil regime. They didn't like it, of course. Just as Offred hates Gilead. But fear, complacency, etc. stopped most from taking action. In the U.S. we like to mock France for this, but Atwood shows its unlikely we'd be any different if it happened here. Fear is a powerful method of social control.

In 1990 MGM made an absolutely terrible film version of the story. The acting, script, etc. are awful. It keeps some of the elements of the novel, but rewrites it is such a way that it completely changes the point. The film tries to make Atwood's novel into a typical action movie, and it so doesn't work. Offred becomes a hero. She helps her friend escape. She spies on her Commander for the resistance. In the end, she kills him and escapes with her lover. In addition to being poorly done, the movie has no point.

My students told me that Hulu is making the novel into a streaming series, which will begin airing early next year. Let's hope they do a better job, but my hopes aren't high. Would the public embrace a protagonist who doesn't even attempt to be a hero? Is it the purpose of fiction to teach us about ourselves and about humanity? Or is it merely to entertain? What are your thoughts?
Posted by Unknown at 3:00 AM