I'm trying to write a blurb for my soon-to-be released novel, The Bull Riding Witch. I think I have fantastic cover art, but the blurb is driving me out of my mind. I will be my forever friend if you tell me what you think of what I've come up with. Would you read this book? 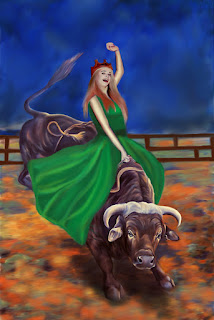 Waking up in a man’s body would ruin any princess’s morning. To make matter worse, Daulphina Her scheming bastard brother has always wanted to get rid of her, but he’s a magical weakling. In fact, she can’t think of anyone capable of magic powerful enough to send her across the void and into another person’s body.
isn’t in Asteria any more. She in the dumpy old trailer and hot body of Joshua Killenyen, a good ol’ boy in Alabama. But how did she get here?

All Daulphina wants is to get back home. But she soon learns she’ll have enough problems surviving where she is. To begin with, Joshua’s pantry is down to its last box of Frosted Flakes and his bank account is empty. In order to eat, she must take up one of his professions, shoveling horse manure or riding bucking bulls. She isn’t about to shovel horse manure, but bull riding, even with her magic, is certainly akin to suicide. Her problems multiple when a curse hits her hand causing her to tumble off the bull and nearly under its hooves.

Magic in this world of technology? Has a witch followed her from Asteria to finish her off? Or is there magic in Alabama after all, and the local witch wants her dead?
Posted by Unknown at 8:55 AM