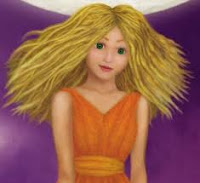 I'm back to my favorite character series this week with Charlaine Harris's Sookie Stackhouse. Harris introduces Sookie in Dead After Dark and does a marvelous job developing her after the 13 book series. True to my affinity for the tortured soul, Sookie has her fair share of trouble, chief among them is her ability to read minds. She refers to it as a disability because she can't turn in off but has the
constant buzz of other people's thoughts in her mind. First, the inability to get some mental quiet would be maddening, and also, as she lets us know, most the time people are thinking about pretty boring stuff. It's also made having a relationship with a man impossible for her because she hears every non-flattering thing men think about her, things that most men have sense enough to keep to themselves. 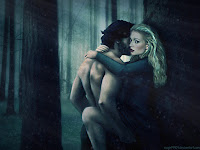 Her life is further complicated when vampires enter her orbit. At first, she thinks this is a wonderful thing because unlike humans, Sookie can't hear vampire thoughts. She's able to have a quiet mind with a man for the first time in her life when she begins dating the vampire, Bill, and is amazingly grateful to lose her virginity to him. However, her heart is broken when she learns that he was ordered to get close to her.

Besides her disability, I like a lot of things about Sookie. Harris doesn't succumb to the temptation to make her extraordinary in other ways. She remains a believable character. Sookie never becomes a
great fighter, and she remains a waitress throughout the series. Still, she is a strong woman who thinks for herself and always tries to do the right thing although, like all of us, she sometimes fails in this.

Don't judge Harris's books based on the HBO series, True Blood. They are a lot better. In True Blood, the characters aren't as interesting, the plots more far fetched, and the gruesomeness that I was okay with when reading about made me a little sick seeing it on the screen. I didn't get much past the first season. Besides, can anyone tell me what the theme song, "I want to do bad things with you," has to do with anything?

If you've read the series, share your thoughts. If you haven't, you should check it out. You can get Dead After Dark by clicking on the link below: