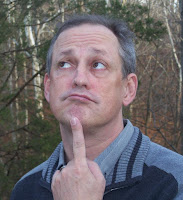 Many people remember Damon Norko from his stumping around the MD-DC area in the 1980s with a "Poems for Sale" sign on his back. He split his time between poetry and song-writing for his rock band, The Submensas (1983-1993). Songs from this era can be found at http://thesubmensas.bandcamp.com/ Life took hold of him for about a decade; he opened a chess store in downtown Baltimore and didn't write much until the early 2000s. His dystopian novel, The Delilah Factor (2010), which imagines a future world inhabited only by men, marked his return to the world of writing. Currently, he is an English teacher and theater director.

1. What made you want to become a writer?

I began writing fiction after being a punk rocker in the early 1980s.  Fiction seemed a natural extension of the lyrics of my songs. I self-published an early novel, Alias Art Mann (1985) which reflects my transition from bar chords and shouted lyrics (like “Fifty million Rambos/Are gnawing at the scene/Gulping Armageddon caviar/Having strange dreams”) to exploring more nuanced points, more in-depth characters, and a more elaborate world view.  But I have always viewed artistic expression as the front line in the battle for human liberty.
2. What are your biggest literary influences? Favorite authors and why?
I believe that Kurt Vonnegut, Ray Bradbury, Robert Heinlein, Samuel Delaney, Issac Asimov and Ursula K. Leguin are perhaps my greatest early influences, all of whom are science fiction authors of some renown.  Each of them has an insightful and far-reaching world view and I feel that there has long been a “conversation” about human interaction with technological development. But consistent in these writers is the sense of humanity, the feeling that “we’re all in this together.”  I look for this connection in everything I read and have found it in other non-SF writers as well, such as Borges, O. Henry, and Poe.
3. If you could have written any other book by any other author, what would it be, and why?
This is an interesting question, and oddly I am going to use someone else’s answer!  One of my favorite stories is Jorge Luis Borges’s Pedro, Menard, Author of Don Quixote, which is written from the point of view of the executer of a man’s estate.  The deceased man, Pedro Menard, had spent his life trying to write Cervantes’ Don Quixote — not copy it but REWRITE it exactly as it was.  He had failed in this endeavor, of course, but the question that had always fascinated me was “Why?”  And the meaning of the story wasn’t clear either.  But it is interesting that we do indeed emulate the work of the greats, and indeed imitation is the greatest form of flattery.  And you can’t help wondering after reading the story just how it would be to write such a work.  And so, I would submit my answer to the question as “Don Quixote.”
4.      What are you reading at the moment? Would you recommend it to readers of this blog? Why?
I recently completed reading every word of Ray Bradbury’s “100 Stories” compilation, which was absolutely fantastic. I highly recommend this book to anyone who is a student of the short story.  So many plots and themes and ideas of Bradbury are left open-ended, allowing for rumination and expansion by those who have come afterward.  Bradbury’s humanity shines through on every page and each image brings delight.  A truly inspirational work!
5. Do you think people have misconceptions about the speculative fiction? Why do you think it is a worthwhile genre?
This question is spot-on, as you can see that I certainly think it’s a worthwhile genre.  But what about others?  In my humble opinion is that people do have misconceptions about the genre, mainly because of an association with conspiracy writings and the like which have cluttered up the marketplace.  What I mean is, the synopses of many recent SF novels all read like Shonda Rhimes’ TV plots (which I actually like). But the average reader, wary of fringe material, is going to pass on some books that might have sound philosophy and a critical world view.
6. Could you tell us a bit about your most recent book?
The Ghost Cop is an inquiry into the world that might be if humanity ever managed to harness of the essence of the human soul.  Would this result in yet another corporate product available only to the elites?  What if a ghost rebelled?  I tapped a character that made a walk-on in the previous ghost book, The Ghost Writer.  I thought it’d be interesting to see how the ghost cop, who was supposed to be guarding against the unknown repercussions of the newly discovered ghost world, suddenly turned against it.
7. Tell us a little about your plans for the future.  Do you have any other books in the works?
I am actively working on two plays, 1980 and 1990, and another YA-friendly novel that is almost done called The Levee (it is not part of my ‘ghost’ series’). The Levee foresees a future Earth in which the seas are dry.  Water is the currency.  Yet things seem very normal for Darren, a Food Mart worker, until he meets an old flame . . .
I am also in the planning stage of another “ghost” book, as well as continuing my Reflections of the Future series of short stories, which now number 10. Some of these are published in various places across the web.
Website: damonnorko.com
Facebook: damon norko
Twitter: @damonnorko
Also, don’t forget the Submensas on http://thesubmensas.bandcamp.com/ 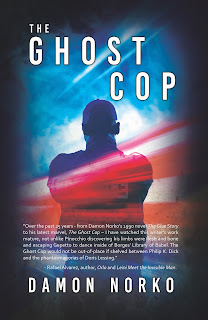 Like osmosis from yesterday’s rain, Thad rose up through the tree, past the peeling bark of the old limbs, and into the mesh of tightly wound younger branches, until he tickled the green twigs that were just unbending themselves to the world. Thad found a sunbeam that had penetrated the dawn mist, and rode the beam as it extended across the land, westward towards the rolling hills of I-70, to where the Orpheum Corporation’s flagship building lay, white and rectangular, surrounded by sidewalks and turf, its rooftop bristling with antennas. Instead of a fence, a grassy berm, sculpted with boulders that were hauled out of the developed farmland, had been constructed along the perimeter. Pennants billowed from electrical signature sensors that were staked along the top of the berm, a rim of nerve endings that spiraled data back to the great humming hive of technology, where large silver screens and field containment systems monitored the world of ghosts. Manning the screens were white-collared employees who were quite unconcerned about the corporation’s philosophy or its bottom line, but who were trying to afford their small apartments and to pay off their student loans while gaining invaluable on-the-job technology experience. (No one who put the name of Dr. Kelvin Herbert, the GCCE’s chief administrator, down as a reference, failed to get a job later on. It was a known fact.) The technicians were locked in fixed concentration upon the luminous screens, which displayed wavy lines of the ghosts who had to be surveilled at all times.
To enter the GCCE, a ghost had to go through the east wall of the building, which was comprised of a long windowless rectangle of white cinderblock surmounted by an immense aluminum and glass skylight, arranged in layers, which bristled with four bulbous radar receptors and dozens of smaller antennas. The absence of windows was not an issue; the skylight did a magnificent job of capturing the rays from the morning sun. The rays were refracted throughout the cavernous reception area, to be absorbed into the potted plants, ferns and forsythias, which had aligned their stems to the skylight: waiting, thirsting, wilting.
The wall was two hundred yards long and three stories high. Though it gleamed white, there ran a motley band of color along the bottom as if some monstrous, mischievous child had used up a giant box of crayons to cover the wall with graffiti. Here were scrawled, in ink or paint or nail polish or blood, or sometimes printed on paper and scotch-taped to the cinder blocks, messages from those whom the ghosts had left behind. On this wall there were notes, news, communiques, missives, Bible quotes, poems and pictures from mothers, fathers, sisters, brothers, friends, and fans who knew that their ghosts would have to come through this wall on their way to and from the Orpheum Corporation, and although the still-living humans could not see the ghosts, they still hoped that their messages would reach the intended target. The paper flyers flapped in the wind for a season, and then the remnants of the messages, plastic tape being resistant to the elements, pocked the paint.
The loved ones merely sought closure, and so they were largely tolerated by the Orpheum Corporation as the price of doing business with immortality. But others who came to the wall were angry and sought revenge against real or perceived wrongs – victims, perhaps, of misbehaving ghosts. There were those who would show up in rags and in poor health, and who would blame their departed relatives for their lot in life, and seek compensation for their loss. These people would cause problems, forcing corporate security to step in. Some of the visitors never left the site. Because the corporate grounds were closed at night, they would camp in the woods and return in the morning to resume their vigil outside the wall, spreading blankets on the grass.
Today, as usual, souls were stirring. A man and a woman had just arrived to claim their usual spot, he with a scraggly beard and long hair, she with a red bandana and a motorcycle jacket. Steaming cups of coffee were in their hands. Another man, further down, sat cross-legged, jabbering at the wall without waiting for the wall to respond. Still another man, near the end of the wall, had a magnifying glass in his hand and appeared to be scrutinizing the messages to see if they had been read.
The jabbering man unbent his legs and leapt up. Shouting incoherently, he flung himself at the wall. It looked to Thad as though the fellow had fancied himself a ghost and had become convinced that he himself could go through the wall.
Idiot! You have to die first!

If the book sounds as fascinating to you as it does to me, you can purchase it below: