Today I return to my series about character development. Sorry, I've been away from this for so long, but with the holidays and the end of the semester, I have been extremely busy. Today, I want to talk about developing character by focusing on the character's actions or what the character does.

It is far better to let the reader know the character's thoughts, emotions, and personality by what s/he does than by simply telling the reader. In other words, the old adage, "show, don't tell." If you tell the reader that your character is ghoulish, it has little emotional impact. It also isn't very precise. What exactly do you mean by ghoulish? Much better to show the character acting ghoulishly. Read the following passages from The Ghost in Exile: 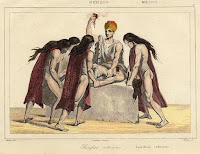 Warily, The Ghost followed Zotico down the corridor to the high priest’s office. It was large, the walls covered with instruments of war—swords, shields, battle axes, and plaques ornamented with what looked suspiciously like human ears. The ears were new. Zotico caught The Ghost looking at them and swept his hand over a plaque that contained five ears nailed side by side. “Do you like the new decor? Sacrifices, all of them. I had them moved from our private sanctuary so I could better remember the devotion demanded by the god I serve.”

Zotico sweeping his hands over the severed ears of people he has killed in ritual sacrifice as if they were a trophy conveys to the reader Zotico’s ghoulishness far more effectively than simply using the word.

While portraying character through action is important at throughout your work, it is especially important to do so in moments when a character changes. When a character grows or changes, the reader needs to see it through what the character does. Brigitta begins The Ghost in Exile as a victim. In the following passage we see her beginning to change through her actions with the dagger. 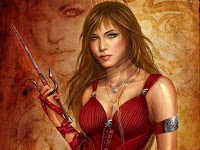 She had to be insane to trust her life to a hired killer. Frigg protect me! No, not Frigg. I’ve prayed to her time and time again, and the goddess has never helped me. But if I can’t rely on her, what can I do? She looked at the dagger she was still holding, then glanced at the sword Sigurd wore. The goddess had allowed her to be used by savages for two years, but Brigitta herself had used Sigurd’s sword to kill her master. Since the goddess couldn’t, or wouldn’t protect her, she needed to learn to protect herself. She tightened her grip on the dagger and held it up. “Will you teach me how to use this?”
Her examining the dagger, tightening her grip on it, holding it up, and asking for instruction in its use shows her becoming empowered to act for herself rather than being acted on by others. Simply saying she decided to protect herself doesn't convey this change as effectively as her actions with the dagger do.
While using the image and the character's voice tell us much about a character, we really get to know a character by seeing what s/he does. It bring in another old cliche, which is nonetheless true, "actions speak louder than words." When a person's actions are at odds with his/her words, we believe the actions, not the words. The same is true in character creation.
Posted by Unknown at 3:00 AM