I've signed up with the book touring company to occasionally host blog tours. The benefit of this to you, my readers, is not only to you hear about new books, but also each of the tours comes with a giveaway in which you can win prices. Do not miss the rafflecopter link near the end of today's post, and enter to win prices. In the comments, tell me how you feel about this addition to my blog. Your feedback will determine how many tours I sign up to host. This week's tour starts with a guest post on the Celtic influences on Valerie Willis's novels. This interested me because my novels also have a Celtic touch, and I hope it will interest you. After the guest post, you can read more about Willis's novels and enter the contest.

Before I even completed one outline on any of the books and plots (Released and still to write) for The Cedric Series, I dove hard into mythology sources from all over the world. Naturally, I started with Celtic and Norse Mythology, lores, and legends. Some characters are more obvious with their Celtic inspirations than others. For example, in Cedric the Demonic Knight we are introduced to the Sorceress Sisters, Morrighan, Nemaine and Badbh. Most assume my Morrighan is the Goddess, but in fact, she and her sisters are inspired by Goddesses within Celtic lore.
Nemaine was harder to tie down, unlike Morrighan and Badbh whose lore wasn’t as broken apart, “Forgotten” or faded into her sister’s stories. These three are also known for being the Fate Trinity in Celtic lore as Morrigan, Badb, and Macha, the three daughter of Ernmas. The harder I dug into their story, scouring the mythology and stories of old for their starting point, the more scarce and confusing the three daughters became. Most of my solid sources came from the books I purchased in an effort to build a more solid and traceable path of research.
The rate of one time found stories, versions, and starting points only added to my want to have them in The Cedric Series as three different entities who are different from one another but still reflect all the different aspects I found. Many may wonder why I didn’t go with Macha, but my goal in the series was to bring attention to lesser known entities, and Nemain seemed to be used in the older versions more so than Macha. Plus, a lot of what I found on Macha was redundant or split off with Badbh or Morrigan, so her essence is still there, mixed between these two. Some of the lesser known, hard to find on the internet information involved them being sent out by their father to lure or distract the hero Cuchulainn. There was even one story of how they were punished for their father’s crimes by losing their left eyes (Other tales just say Morrigan was alone and Cuchulainn shot her eye out)… perhaps something to come in a future book!
Now, in regards to Cuchulainn, I drew inspiration from The Cattle Raid of Cooley. It gave me the perfect starting point for my second novel in the series, Romasanta: Father of Werewolves. This whole fight starts with a prized Bull being stolen from the hero and then leads to even a fight with a wolf. Granted in the original variants that wolf was Morrighan, but in my story I use it as a way to pull together Mythology involving Japanese Forest Gods meets Norse God Fenrir! You can read the first chapter of Romasanta on my site, www.willisauthor.com.


This is only scratching the surface of the Celtic inspiration that peeks through my characters and plot. As the series unfolds, readers can look forward to more glimpses of Celtic, Norse, Greek, and even superstitions!

Lord Cedric du Romulus may be a powerful knight, but he’s no human nor does he like masquerading as one. He is a mixed blood demon made by Sorceress Morrighan in her quest to create an army of powerful underlings. Seeking out ever-stronger enemies, he devours them for their power; nothing is safe from his fangs whether they are beasts, demons, or magic wielders. When he finds himself staring at Morrighan’s castle, will he be able to follow through with his life’s ambition and leave behind his lover and wife, Lady Angeline who herself is an heir to a legacy of unknown magic.

Romasanta finds himself a cursed man and struggles with his internal demon, literally. All his troubles start with a stone and after that he will be losing everything he's ever loved. Faced with clinging on to what little humanity he has, he will lose it many times before reaching the end of his journey. His life's tale will take you through time to see how every lore, every moment in history tied in with wolves all come back to him. They call him the Ancient One, others simply refer to him as the Father of Werewolves, but we know him by his name, Romasanta. Many battles will be fought before he gets closer to his goals, but will he be ready to finish what was asked of him at the very beginning of his horrible fate. Will he be able to return the Eye of Gaea and free the love of his life from the laurel tree in the Black Forest?


With Angeline back in Cedric's arms and the Eye of Gaea in Romasanta's grip, the next step in their journey begins. Knowing they will be facing the mother of dragons, Delphyne, at the top of Mt. Parnassus, they assemble a group to traverse the barrier which dissolves any technology and renders gunpowder useless. The question weighing on their minds is if two werewolves, the incubus King, and a demonized sorceress is enough to fight their way to see the Oracle? 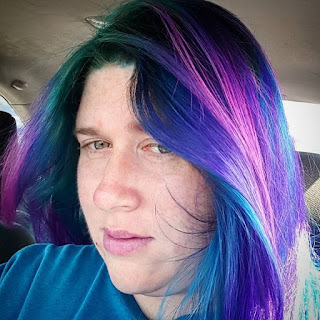 Valerie Willis, a sixth generation Floridian, launched her first book, Cedric the Demonic Knight, at the start of 2014 on Amazon.com. Since then, she has launched the second book to The Cedric Series, Romasanta: Father of Werewolves (2015), with several installments to come in this high rated Fantasy Romance Series. She pulls in a melting pot of mythology, folklores, history and more into her work with a remarkable amount of foreshadowing that makes reading her books a second time exciting. Also she recently published Rebirth the first book in her Teen Urban Fantasy, the Tattooed Angels Trilogy. Currently on the table to be completed is book two for the Tattooed Angels Trilogy, Judgment and book three in The Cedric Series, The Oracle.

5 Free ebook copies of any of my books of their choice & 1 Paperback of choice signed with signed bookmarks to share with friends! Click the link below to enter and good luck!