Today welcome John Catapano, an author I met at Necronomicon.  Seriously, if you've never been to a con, you need to check them out. 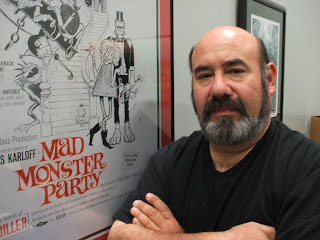 John Catapano is an author, an artist, and an engineer. He has been a genre movie fan since his first double feature at age 3. Fifty -eight years later he has traveled extensively, consulted on feature movies and dug for Dinosaur fossils in the badlands of Montana.  His genre trivia book and short stories are available at smashwords.com. His new book, The Unusual Suspects is the follow up to his popular Dr. Sarcophagus story "Clarence." He currently is working on two novels, both with Central Florida locales.

Dr Sarcophagus returns to the winter compound with three new acts for the Carnival. A short time later a grisly murder in the woods nearby leads him to believe there is a shape-shifter in their midst. Can he figure out who the killer is before the next full moon? If he does how can he stop it?

John Catapano presents the sequel to his popular story "Clarence." The enigmatic Doctor is embroiled again in an arcane mystery.

The next night, Minnie joined them for dinner.
"Doctor, I would like to thank you for inviting me to dinner. This is so exciting!" Minnie said clapping her hands. "Gerard and I wanted to take an opportunity to say how impressed we were with your performance the other day."
"You had everyone on the edge of their seats." the Doctor said as Gerard nodded. "Well, we all have our talents, and I'm glad you were entertained, but I'm excited about these hot dogs and fried potatoes! They look yummy!" she said her eyes open wide. "No more delays then. Bon Appétit!" the Doctor replied. The room filled with the sounds of three people enjoying a meal, one much more enthusiastically than the others. As Gerard brought more Cokes out from the ice box, Dr. Sarcophagus began to explore Minnie's past.
"Well, my father was the supervisor of the plantation and so I had full run of the place," Minnie started. "Was the jungle very close?" the Doctor probed.
"We were surrounded by the jungle. The men constantly had to keep it at bay. Everything in that climate grows very quickly you know,"she said.
The Doctor continued, "Being that isolated sometimes leads to a regression back to superstitions that the surrounding civilization has long put a way."
As Gerard placed the sweating bottles on the table, Minnie exploded into raucous laughter. "Oh, Doctor! I was wondering how we would get around to the subject," she said between breaths.
"What question is that?" the Doctor said as coyly as possible while Gerard slowly sat down.
"That I am a witch of course! When I heard you had presented Diane with your silver topped cane and tried to feed poor Henry some raw meat...."
Gerard interrupted, "That was Steak tar tare," he said with a straight face.
"Yes, of course," Minnie continued, "I surmised that you believe the murder in the woods a few weeks ago was done by a shape-shifter. I assure you, Doctor, I cannot change into a were-tiger, and I did not murder any of those people."
Dr. Sarcophagus sat back in his chair and placed his utensils on the table. Gerard spoke, "Were we that obvious?"
Minnie reached out and touched his hand. "No, no, my dear. Neither of them suspect, but I am curious. Have you vetted Andrei yet? Don't tell me; the silverware at dinner?"
Now it was the Doctor's turn to laugh, "The silverware and wolf's bane under his chair. Gerard just got the smell out of the wagon."
"Did he turn into a wolf?" she asked.
"No, he did not," the Doctor said, "Tell me, Minnie, why were you sneaking into the forest that night?"
She wiped her mouth with her napkin, "So I was seen."
"There were a number of people seen entering the forest that night," Gerard said.
It was Minnie's turn to sit back, "I may be able to clear up some of that for you. Diane came to my wagon that night.  She and Andrei had a huge fight. She asked him to come to her wagon, but he was distracted, worrying about the bear. He stomped out of the wagon, and Diane came to me in tears. I tried to console her, and as we walked back to her wagon, we saw Andrei rushing into the woods. Of course, she followed."
"Did you know that Henry was in the woods that night?" the Doctor asked.
"I did not know that," Minnie continued, "but I may have an explanation . Henry is seeing one of the acrobats, Elizabeth I believe, and her sisters do not approve. They have been having clandestine meetings outside of camp almost since the day we arrived."
Dr. Sarcophagus smiled, "Well that explains his faulty alibi. What were you doing in the woods that night, Minnie?"
She giggled, "I am also having an affair I'm afraid; with Lucas. He is a wonderful man," she said with a broad grin, "We had a romantic evening under the stars that night."
"Well, I am happy that you have found a kindred spirit here," the Doctor said.
An hour later, Minnie left and Gerard and the Doctor were clearing the table. "So, it seems everyone in the Carnival is having relations except me, Doctor," Gerard said almost as an aside.
"Yes, it seems so, perhaps it is time to move on. Penelope left the Carnival almost six months ago," the Doctor continued, "but more importantly, we are no closer to a solution than before. The bear didn't commit the murder, and none of our suspects are shape-shifters. Of course, we only have Minnie's word for herself."
"Maybe she bewitched Logan, and she really is a were- tiger! That can be the only explanation!" Gerard said with increasing hysteria, "that is why she can control Kali!"
The Doctor raised his hands in a slowing motion, "Now, now Gerard. I don't believe Minnie has a deceptive bone in her body, but that leaves us with no suspects and the full moon approaching."
Gerard continued clearing the plates, "Do you have a plan, Doctor?"
"I do not, and I am much too tired to formulate a plan," Doctor Sarcophagus replied stifling a yawn, "All this socializing has worn me out."

Tell me in the comments what you think.