An Interview with The Ghost

The Ghost in Exile is just a few weeks away from release. Another blogger had me do a character interview with The Ghost. Because I liked it and to get you excited for the book's appearance, I'm reposting the interview here. 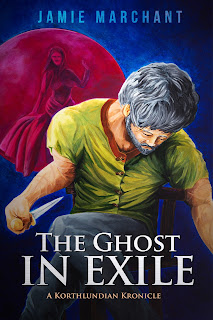 Hello, _Ghost?____.  Thank you for agreeing to speak with us today!  Let’s start with learning some basics about you and your world.

What is your full name?  Do you have any nick names?

That’s a hard question to answer. My mother named me Ahearn. I had no surname because not even my mother knew who my father was. There were too many choices. When I was seven, my mother kicked me out and sent me to live with my Uncle Barris.  I began calling myself Ahearn Barrisstamm after him. But I only kept that name for a few years. Because of an unfortunately affair with the queen, I was exiled at eighteen and became an assassin.  I gave up my childhood name because I became a man my uncle would never recognize. My partner named me Darhour, which means Exiled One in his language. Later I earned the nickname The Ghost because I became so good at getting into my victim’s rooms, it was believed I could walk through walls. I have also used the names Pandaros, Sigurd, Adrastos, and a host of others. So when you ask me my name, I’m not sure how to answer.

Where were you born?  Please describe it to us.

I was born in a decrepit hut in Korth. Korth is the northern of the joined kingdoms of Korthlundia and is mountainous with high cliffs, deep valleys, and incredible waterfalls. It’s a truly beautiful land although very cold in the winter. As far as the hut goes, the less said about it the better. I’m not even sure how much of the vileness of that place are my true memories and how much I’ve added in because of the despair and unhappiness that pervaded it or because of the frequent abuse I suffered at the hands of the various men in my mother’s life.

Do you have living relatives?  Are/were you close?  (If they’re dead, how did they die?)

My uncle Barris died when I was fifteen in an epidemic that swept through the capital. I loved him completely. He not only took me in with no questions when my mother kicked me out. He treated me like a son and taught me everything I know about horses. I still grieve his death, but I think it fortunately he didn’t live to see what I have become. Whether my mother or any of my brothers and sisters are still alive, I don’t know. I don’t even know how many siblings I have. When I went to visit my mother after my uncle died, she didn’t recognize me. I told her who I was, and she made it clear I wasn’t welcome and closed the door in my face. I haven’t heard from her since. The only relative that matters to me now is my daughter, the result of the affair that led to my exile. My daughter is now queen of Korthlundia and has only recently discovered that the king wasn’t truly her father. For awhile, I served as the captain of her personal guard, but that couldn’t last. It was like ripping heart out of my chest, but I had to flee her side because I couldn’t risk corrupting her with my darkness or of anyone noticing a resemblance between us. If the court learned she was a bastard, it could cost her her throne or even her life.

How did leaving your daughter alter your life’s path?

I once vowed never to kill again, but in protecting my daughter I broke that vow in a spectacular fashion. It is now clear to me that killing is the only thing I will ever be good at. I decided to return to the land that made me a killer and rid the world of those it’s better off without.

What is your personal “style”? Please describe your appearance.

My daughter stays that I have a look that makes men piss in their pants if I so much as glance in their direction. Part of the fear I inspire is because of the scars that cover my face. When I was in the Saloynan army, I was captured and tortured. My tormentor carved horizontal lines all over my body, starting with my forehead and ending at my feet. But it isn’t the scars alone that produce this effect. The man who named me Darhour claimed I had the coldest eyes he’d ever seen.

I’ve had very little happiness in my life. For the short time I knew her, my daughter made me happy. With her, I laughed, something I’d forgotten how to do. Now that I’ve been forced to leave her, I doubt I’ll ever be happy again.

Who/what is your greatest fear?

That something will harm my daughter. Siring her is the only good thing that I’ve done in my life.

Who do you most admire (from your world, history, books, etc.)?  Why?

Ironically, the man I most admire is the same man who ruined my life, Solar, the king who raised my daughter. As a young man, Solar skillfully ended the civil war between Korth and Lundia and ushered in fifty years of unbroken peace, which allowed his people to thrive. But he found himself an old man without an heir. He knew that if he died without one, the joined kingdoms would descend into chaos, so he decided if he couldn’t sire his own heir, he’d get someone to do it for him. He manipulated circumstances in such a way that his young wife was frequently in my company. When the inevitable happened and the queen’s pregnancy was confirmed, he had me disposed of. After he exiled me, I hated him with a passion so intense I wanted to carve his heart out, but I’ve grown to not only understand, but applaud what he did. He understood his duties as king and knew that one life couldn’t matter next to the thousands or tens of thousands who would die in the civil war between rival claimants to the throne. He was a great king. But that isn’t the only reason I admire him. Even though he knew that Samantha wasn’t his own flesh and blood, he loved her as deeply as if she were. He raised her to be strong and taught her everything she needed to know to rule after he travelled beyond the Far Mountain. Because of him, my daughter is a magnificent woman and queen. He was a far better father to her than I ever could have been. That alone earned him my undying loyalty.

Have you ever been in love?  How did that work out for you?

At the time, I thought I loved Queen Fenella, my daughter’s mother. But I was so young then, I didn’t even know what love meant. I’ve already told you how that worked out.

How would your friends/family/allies describe your personality?

Frightening. The only person who didn’t fear me at first sight was my daughter, somehow she saw something in me that no one else did.

If you could change something about yourself, what would it be?  Why?

At this point, nothing. It’s too late for me to change. I tried to reform, but my vow to never kill again nearly cost my daughter her life. I know who I am now. Nothing can alter that.

If you haven't pre-ordered your copy yet, don't miss out. Signed copies can still be ordered from my website at the special pre-order price of $13.

Or if you prefer ebooks, you can order the Kindle copy on Amazon by clicking below: