Review of The Birth of Death

I met Joseph Macolino at Windycon, and we traded books. Here is my review of The Birth of Death: 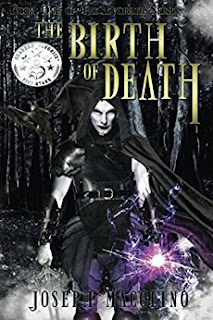 I greatly enjoyed Macolino's novel. He creates a world full of many of the typical magical creatures--elves, centaurs, trolls, but also throws in some lesser known races and some creations of his own. Overall, he creates a vivid and lively world that the reader can get lost in. The characters are deep and human, even though many of them aren’t technically human. They respond with real human emotions and feel like people you’d like to know. He handles the multiple points of view masterfully. To me character development is the most important part of any novel. If I don’t care about the characters, I don’t care what happens to them, and I definitely cared what happened to Artimus, Savannah, Irontail, and Tel’Shira. The plot is interesting and well developed. It also didn’t turn out exactly as I thought it would, which was a nice surprise. When I met Macolino at Necronomicon, he claimed the book was dark, and it isn’t exactly sunshine and roses, but the darkness doesn’t overpower the narrative and leaves room for hope.

I highly recommend Macolino’s first novel, and I eagerly awake the sequel.