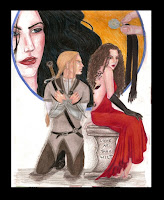 Instead, Phédre becomes a strong woman who not only revels in sex, but becomes much more when
her country becomes threatened. She uses her intelligence to uncover a plot against her kingdom, and with her bodyguard/later lover, Josselin, works to thwart it. In their relationship, there is never any doubt that Phédre is the dominant partner. However, her power is the power of her intellect. Josselin is the bad ass fighter, but it is her mind as often or more than his skills that get them out of trouble and solve their problems.

Throughout the series, she never loses this combination of sexuality and intelligence. She is always comfortable in her body and with her desires, something far too few of us real women are. But she is never defined by it, or at least not by it alone. Her relationship with Josselin is deep and lasting, but it never becomes the focus of the books. It is her mind that helps her to become a true hero. Many literary strong women seem more like men with breasts, but Phédre remains very feminine, proving the femininity doesn't need to mean weakness. For Phédre, it is strength.

The sexuality in the books is quite graphic, so but if that isn't a drawback for you, she is a character you will fall in love with.

Check her out in the first book of the series, Kushiel's Dart, and I guarantee you will want to read the rest of them. If you do, let me know what you think in the comments below.