Today, my guest is Nadine Ducca, author of the marvelous sci-fantasy novel, Serving Time. Come back tomorrow for an excerpt and my review of her novel. 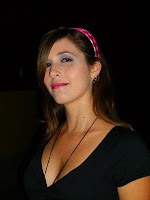 I'm from California, but I moved to Barcelona, Spain, when I was a teenager. I've been living here ever since.

I've had many hobbies over the years, from making necklaces out of polymer clay to going out in the middle of the night and indulging in some astrophotography. However, I'm a creative mess, and my hobbies come and go. There is only one activity I will never, ever side aside: writing!

I try to write something--even if it's just plain nonsense--every day.

I can’t pinpoint a specific moment when I said “Now! I’ll be a writer now!” Instead, writing has been an ongoing pastime in my life. Ever since I was a child, I enjoyed writing (and illustrating) short stories I was one of the “special” few who used to get excited whenever the teacher handed out an essay…

Back in the nineties, there was a great computer program (whose name I cannot remember…) that let you set up your own picture book. You could choose the number of page, and then go bonkers adding scenery and people, animals and props from the wide (actually quite small) selection of images. It was great! You could even flip the images around. Without a doubt, the nameless program had a great impact on me and my writing.

I actually still keep several titles from when I was a kid: Clara the Cow, The Dinosaur Dictionary (including top-notch scientific explanations such as “Chickens are also dinosaurs. I bet you didn’t know. Well, chickens are also dinosaurs.”), and A Different World. This last short story is a bit surprising, considering I was 7 or 8 when I wrote it. A Different World explains the creation of different life forms, evolution, and finally the arrival of a sentient species, all with the helpful nudge of an external entity. It actually reminds me quite a lot of 2001: A Space Odyssey, and it is the basic premise for Serving Time.

Your novel Serving Time mixes fantasy and science fiction. What about this combination appeals to you?

I’m a firm believer in the paranormal. I believe there are ghosts and other entities out there, as well as extraterrestrial life forms that might or might not be more technologically advanced than us. For me, it’s not a matter of “see it to believe it.” It’s a matter of opening your mind and believing in order to see everything that surrounds us.

What happens in Serving Time is that Tristan and Eneld live perfectly normal futuristic lives—until they realize there’s much more to life than they thought. The fantasy elements are woven into the story: from the resentful demons forced to do all the hard labor to the vain and somewhat absentminded goddess, Time.

I guess what appeals to me most about the sci-fantasy combination is how the elements of each genre interact with each other. The science fiction characters (Tristan and Eneld) come across the fantasy characters (Robert and Time) and mayhem ensues. Beliefs are questioned or torn apart, and life for the heroes becomes a lot more complicated.

What inspirations lie behind the novel? Where did you get your ideas from?

When I was a teen, I got the idea for a short story involving two brothers, Tristan and Seth, who made a living looting derelict space ships. In the short, they pushed their luck too far in the black market and quickly ended up on the system's "Most Wanted" list. To avoid being caught, they decided to make a dash for Earth, the capital of chaos, where anyone with a past can blend into the crowd.

As a teen I never got round to writing the actual voyage, and I let the story sit and gather dust for several years while I went to university and started my career.

The idea remained latent in the back of my head that whole time until I finally decided enough was enough! In June of 2011, I enrolled in a creative writing course, and in November 2011I joined Critique Circle, an ongoing critique group.

Characters changed names and appearance and aspirations. The plot evolved and became more intricate. Fantasy came poking its head over the edge of my computer screen, and every now and then asked, "Can I be it it, too?" In the end, a certain goddess of Time, a supercilious necromancer, and a slobbering pack of demons demanded to be let in on the fun, so I welcomed them into my novel.

We might butt heads every now and then, but we're one big happy family.


Are your characters based off real people or did they all come entirely from your imagination?

In all of Serving Time, I can only think of one group of the minor characters who are loosely based on real people: the grimy, neohippie inhabitants of the ark starship Stone Cloud. I have to admit I didn’t do them any favor!

All of the main characters come from my imagination and, inevitably, many of them also contain some of me in their personalities. For example, Tristan is my cynical, pessimist side while Eneld represents that little part of me that always tries to find that silver lining.

Don’t make me choose! I love them all. Even the super-cruel-drop-dead villains!

Now that I’m working on the second novel in the series, I’m spending a lot more time fleshing out the character Robert Westbrook. He was a supporting character in Serving Time, but becomes more and more important in Making Time. In the first novel, Robert already starts off calling himself the Demon Master, which just goes to show how great he thinks he is. He’s hopelessly drowning in puppy-dog love for the goddess Time, and controlling his emotions will be one of his hardest challenges.

Without giving away any spoilers, I have to say Robert’s journey is one of the darkest and one of the most entertaining. Yes, I admit it! I like to give my characters a hard time!

While going through the entire process of becoming a published author, I had two big surprises: a good one and a bad one.

However, not everything is rainbows and butterflies. The bad surprise came shortly after publishing my novel. Marketing! For someone like me who has very little marketing experience, the whole process can easily become an absolute pain, and it drains away hours that could be dedicated to writing.

Why did you decide to self-publish?

No, seriously. I was weighing different options, and I learned about self publication through Critique Circle. I heard about other people’s experiences, difficulties and successes, and after giving it some thought I decided it was the route I wanted to go.

I want absolute control over my books, and indie publishing grants me that. I want to choose the cover, the layout, and the price. I want to have the assurance that even if my book doesn’t do very well, it will still exist for as long as I say so and won’t get pulled from the retailers, as happens with traditionally published books. In traditional publishing, you get one chance. If your book doesn’t succeed, that’s the end of that. With self publishing, on the other hand, you have the freedom to make all the changes you want, whenever you want.

Is there any particular author or book that influenced you either growing up or as an adult?

I’m not sure. I’ve read hundreds and hundreds of books, and all the stories and characters are a mish mash inside my head. I suppose all of our experiences influence us, so all of the book I have read must influence my writing.

Do you have a day job in addition to being a writer?  If so, what do you do during the day?

Actually, I have two! I work full-time at a language school and part-time at the Open University of Catalonia.

The writing tip that has had most impact on me and my career as an author is: “join a writing community.”

I admit I made the hermitage mistake: I went at it alone for too long. Writing was a lonely experience. When I found Critique Circle, it was like joining group therapy. I wasn’t alone! Here, at my fingertips, were hundreds of other writers! People who were just starting out like me, and people who had been writing for years. Published authors, unpublished, we are all in there!

My favorite tip is to get over your shyness (or, for some, superstition) and share your work with others. Stand up and say “I am [insert name], and I’m a writer!” Take pride in what you do, but also pay attention to the advice others give you. That is, in my opinion, the only way to grow as a writer.

Tell us a little about your plans for the future.  You call Serving Time (Servants of Time, Book #1) Do you have any other books in the works?

Yes. Right now I’m working on the second novel in the series. The title is Making Time, and I recently finished the first draft. I’m editing these days and trying to solve some minor plot problems that popped up. I hope to have a completed version of Making Time in the next few months and to release it by the end of the year.

Where can we find you online? (please cut and paste links):