This week's guest is Elizabeth Baxter, author of The Last Priestess, a fascinating fantasy novel. Tomorrow you can see my review and read an excerpt. Today, we have an interview. 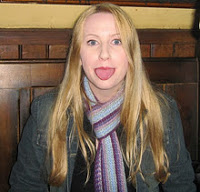 Tell us a little about yourself? Perhaps something not many people know?

Um. Other than being a cricket fan? Obsessed with fantasy fiction? One thing that people always find surprising is that way back my family owned a castle. It’s just a ruin now sitting on a hill about twenty miles from my house, but it’s still cool to think that my ancestors once lived there.

I can’t really answer that question. It’s just something that’s always been inside me. Since I was six years old, I’ve never wanted to do anything else. I once saw an interview with JK Rowling where she was asked the same question. Her answer went something like, “I can’t understand why the whole world doesn’t want to be a writer. What’s better than it?” And that’s how I feel.

Could you tell us a bit about The Last Priestess?

The Last Priestess is an epic fantasy tale that centers around two main characters: Maegwin (the last priestess of the title) and Rovann, a mage who serves the king. These two are thrown together as they try to track down a rebel mage, Maegwin because she wants revenge for the slaying of her order, Rovann because the mage poses a threat to the kingdom. They don’t trust each other. They don’t even like each other much. And yet somehow they have to work together to achieve their goals. Along the way they learn a lot about themselves and each other and discover that the problems facing the kingdom run much deeper than they thought.

What gave you inspiration for your book?

It started with the magic system. I was doodling in a sketch book one day when an idea for seven interconnected realms of existence popped into my head, so I drew a map of it.  Each realm had its own laws of physics and was dominated by one particular element. Once I had that in place I needed the characters to fill it. Maegwin and Rovann came strolling into my head and voila...the story was born.

I’m a sucker for tragic, handsome heroes, so I’d probably go with Rovann.

Your novel is Indie published. What made you decide to take that route?

I was actually offered a traditional publishing contract that I turned down. Perhaps I was crazy to do that but I’ve not regretted it since. I thought I could have more fun and keep more control over my writing by doing it myself. And I was right. Going indie has been exhausting, confusing, frustrating and daunting. But it’s also been enjoyable as hell. I’d highly recommend it to any aspiring writers sick of the slush pile of trad publishing.

How supportive and knowledgeable the writing community is. I’ve learnt so much from other writers and everyone is so generous with their advice. It’s great.

Is there any particular author or book that influenced you in any way either growing up or as an adult?

There were three writers who had a huge influence on me growing up. One was JRR Tolkien (don't all fantasy writers say that?) as LOTR just blew me away. Another was Richard Adams (writer of Watership Down--how I loved that book!), and lastly Stephen Donaldson from whom I learned how goodies and baddies aren't always so black and white but varying shades of grey.

Do you have a day job in addition to being a writer?  If so, what do you do during the day?

I’m a college lecturer. I specialize in diagnosing and teaching students with dyslexia and other learning difficulties. It’s very rewarding (and hard work!).

"Every paragraph should have a killer sentence." Can't remember who said it, but I have it stuck on my wall. Along with, "Great characters=eccentricity."

Tell us a little about your plans for the future.  Where do you see yourself as a writer in five years?  Do you have any other books in the works?

2013 is going to be a big year for me. I’ve got four short stories and three full-length novels planned for release. Book 2 of The Songmaker, King’s Mage should hopefully be out later in the spring. In five year’s time? Living in the Maldives and writing the odd story here and there of course!

Any advice you have for other writers?

Have fun. Learn everything you can. Never give up. Oh, and buy yourself a treadmill because you are going to spend many hours sitting on your backside.