I met Holly on Twitter. She has a tendency to post adorable pictures of kittens, puppies, and other baby animals, which first attracted me to her. Then I became intrigued by her mention of her novels starring a gay tattoo magician. I had to check them out, so today, in addition, to my unusual author spotlight, I'm writing a review of the first novel in her Ink Born series, Stolen Ink. 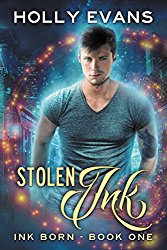 I’m Dacian, a tattoo magician, and my life went from my biggest concern being finding a pretty guy to fall into bed with at the end of the week to everything falling apart around me.

There are two problems in my life.

Number one – I’m an ink magician, the thing of myths. A lot of very powerful people would love to get their hands on me, and I have no intention of letting that happen.

Number two – A tattoo thief came to my city, and the magical community has decided that I’m the guy to stop them.

Somehow, I have to catch the thief without letting my secret out of the bag, and that’s even harder than it sounds.

I absolutely loved this book. First, Holly has created a truly innovative world that drips with magic. It is urban fantasy in the sense it's set in a large city with contemporary level of technology, but it most certainly isn't our world.Tattoos pick their wearer, and the tattoo magician's job is to call them forth, not create them. The creatures can then leave their tattoos and become corporeal. Most people have magic of one kind or another and humans share their world with elves and other mystical creatures. It truly isn't like any other urban fantasy world that I've read (and I've read a lot of urban fantasy). More importantly to me, Holly has people her world with fantastic characters. Dacian is sexy, intelligent, and intriguing, but my favorite character is Kyra, his tattoo cat. I love cats to begin with, but Kyra is a feisty one who literally claws the eye out of the bad guy to protect her people. How can one not adore such a creature? The plot contains an appropriate amount of mystery, danger, and intrigue. After finishing it, I immediately pre-ordered Book II, Blood & Ink, and I believe you will, too. I highly recommend Holly Evans and her Ink World.

I gestured to the tattooing chair. “Strip down to your pants. I’ll paint the design of the tattoo that’s trying to break free. Should you choose to accept it, then I’ll bring it forth and tattoo it. It will be painful. The more powerful the tattoo, the more pain you will endure. You will find its presence in the back of your mind once we’re done. As this is your first tattoo, I must add that, if you do not like the design, you cannot choose something else. Should you try and do so, you’ll be risking disfigurement or even death. Do you understand?”
He gave a short sharp nod before he carefully unbuttoned the black jacket and folded it, taking his time to ensure that the shirt was properly folded and crease free next to the tattooing chair. I could almost see the skin of his back shimmering where the tattoo fought to be free. It covered his entire back and wrapped around his ribs. Keirn would owe me a few drinks once I was done battling something of that size.
“Sit with your back to me, and I’ll paint on the design,” I said.
He nodded in acknowledgement and straddled the padded leather chair, his strong back facing me. Taking a deep breath, I opened myself up to the threads of tattoo magic. My own tattoos wriggled and clawed, trying to be free. I mentally growled at them to be quiet. There was work to be done. Kyra yowled at me. The cat had never been one to do as she was told. Aris, however, stilled, his form tightly coiled against my spine. The soothing warmth of the magic flooded my being and tugged my hands towards the brushes. My instincts took over, removing all superfluous thought. I was verging on nothing more than a vessel for the magic. It was a dangerous dance, but one I loved more than life itself.
The tendrils of magic flexed and coursed down the brush. There was nothing but the painting. Everything else slipped away as I lost myself to the art, caressing the threads and edges of the creature that was buried within the man’s very existence. It didn’t need coaxing, it practically exploded through the colour. I stepped back and wiped sweat from my brow. My hand froze halfway down to my hip when I saw the art on his back. It was there in glorious colour, clear cut lines and heavy muscle. There was no denying it, no escaping the fact that he had a dragon desperately clawing at the fibres of his being.

1.                  Tell us a little about yourself?
I’m a passionate little red-headed woman originally from England, but I now live in Co. Kerry, Ireland. I’m only 5’2, but I make up for my lack of size with my huge personality and attitude. When I’m not writing Urban Fantasy, I usually reading it or wandering around the local area taking in the views and seeing what inspiration pops up.
I’m probably a little bit too interested in sharp pointy things, fae (particularly those with sharp pointy teeth), and fast cars. I plan on having a Dodge Challenger in the future – that deep growling v8, yum!
2.                  What are your biggest literary influences? Favorite authors and why?
I’m honestly not sure who my biggest influences are. Dr. Jekyll and Mr. Hyde definitely had an impact on my writing. I tend to explore that man and beast line and dynamic quite a bit. The Night Circus also had an impact; it really encouraged me to embrace my poetry side.
As for favourite authors I adore Seanan McGuire. Her clear love of mythology shines through in her books and makes for engaging, deep, and fascinating Urban Fantasy. Maggie Stiefvater’s books are poetic, sumptuous, and beautifully crafted with real emotion. S.M Reine’s worldbuilding is fantastic, and I adore Gail Carriger’s way of balance humour, action, and romance.
3.                  Do you think people have misconceptions about the speculative fiction? Why do you think it is a worthwhile genre?
I think there are a lot of assumptions thrown around that speculative fiction is nothing more than idle escapism. It isn’t worthy of those who wish to think.
It’s a worthwhile genre because of the scope! That step away from reality opens up the possibilities for exploration. We can explore the very fibres of humanity, psychology, through shifters. We can ask ourselves how society is put together and look at possibilities of the future through sci-fi. The potential to explore philosophy, psychology, sociology, and more is huge! No longer are we constrained about the hard and fast laws of reality; we can use the realms of our imagination to ask ‘what if?’
And yes, we can offer people the opportunity for escape. We can give people who feel trapped, lost, and worse, a place to have adventures and to explore who and what they are. We can provide safe spaces and spaces in which to think and be happy. Is it really so wrong to give people an escape from the grey drab of day to day life?
4.                  Could you tell us a bit about your most recent book?
Yes and no, lol. My most recent book is Blood & Ink, but as that’s book 2 in a series, I can talk about book 1, Stolen Ink.
Stolen Ink is an Urban Fantasy that follows Dacian, a gay tattoo magician. It’s set in a fantasy kitchen sink, meaning that there are lots of types of magic, magical creatures, etc. The entire cast is LGBT+ (primarily gay with some bi and an ace character).
Dacian wants a quiet life, but everyone around him has other plans. He’s not a typical hero, but he’s an absolute sweetheart.
5.                  Of all the characters you have created, which is your favorite and why?
Tyn. He isn’t in a published book, but I love him. He’s broken, he’s had a horrible start in life, but he has a heart of gold. He comes across as a bit of a jerk sometimes, but he’s my little kitten, and I adore him. He’s a Cait Sidhe (a fae cat), and he shows up in Blood & Ink.
6.                  Do you have a day job in addition to being a writer?  If so, what do you do during the day?
I’m a developmental editor – I look at the big picture stuff, plot, character development etc. So when I’m not writing, I edit other people’s books for them. I might be a tad too passionate about books and writing…
7.                  Tell us a little about your plans for the future.  Do you have any other books in the works?
I have Blood & Ink currently up for pre-order, that goes live on May 5th. I’m currently book 3 in the Ink Born series; Ink Bound will go live in early August. Then Seers Stone is book 1 in a new Urban Fantasy series, that’ll go live in early November. Seers Stone follows Kaitlyn, a treasure hunting alchemist, and her books are set in the same world as the Ink Born books. I’ll likely keep writing a bunch of series in the ink world for a good few years now. It’s huge; there’s so much to explore!
Where can we find you online?
Blog: http://chaosfoxwriting.wordpress.com
Twitter: https://twitter.com/KhaosFoxe (Jamie's note: If you like adorable baby animals, you need to follow Holly.)
Amazon: https://www.amazon.com/Holly-Evans/e/B01ESEZALC
Stolen Ink: https://www.amazon.com/Stolen-Ink-Born-Book-ebook/dp/B01MTMZBKL 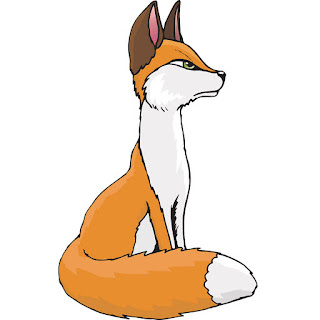 Holly Evans is an urban fantasy author with an unhealthy fascination with blades, a deep love of hellhounds, and would love one day to wake up as a fae. When she isn't wrangling rogue characters and trying to tame her muse, she's researching shiny new ninja moves. During her spare time she fights crime and rights wrongs on the streets of Prague.