Welcome my guest today, author Hannah Ross. Be sure to comment below. I love to hear your opinions. Also, remember that every comment on my blog between now and May enters you into a contest to win either a signed print or ecopy of The Bull Riding Witch. To make the contest sweeter, I've added a $25 Amazon gift card to the pot of prizes. 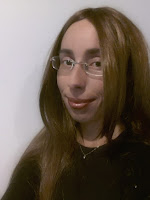 Hannah Ross wrote her first story at the age of six and hasn’t stopped since. Wishing to have a steady profession, she trained as a clinical nutritionist, but the writing bug was too strong and Hannah continued to write fiction in the form of short stories, novels, poetry and plays, as well as many non-fiction essays and articles.

Hannah enjoys a quiet life in the country with her husband, three children, two cats and a flock of chickens.

I’m Hannah Ross, a writer of primarily high and epic fantasy. I also write science fiction/dystopia and historical fiction. Until now I’ve been an indie author, but I’ve signed a publishing deal for my upcoming novel, Wild Children, with Mason Marshall Press.
I’m a homeschooling mother to three young children. My husband and I enjoy a rural life very much in the boonies, where we have a large garden and a flock of backyard hens. Digging in the earth and collecting fresh eggs is incredibly de-stressing and healthful to the soul.
By training, I am a clinical nutritionist and provide one-on-one as well as group counseling.
I started writing stories almost as soon as I could hold a pencil. My endeavors weren’t treated very seriously by my family, who insisted that I “quit scribbling and do something useful,” but I never listened. The allure of creating worlds of my own was impossible to resist. [Jamie’s note: Good for you. Writing is incredibly useful, and a true writer cannot not write.]
I find outlines incredibly helpful to get me organized and stream my writing in the direction the plot needs to go. Having said that, if I’m stuck when doing an outline, I may try some improvising and see where it gets me.
I like contemplative, meditative music that helps me concentrate as I write. One of my favorite styles is the Sami (Lapland native) yoiks. They create a haunting, enchanting atmosphere. If you want to try them, search for Ulla Pirttijarvi on YouTube.
My recently published book, The Greenlanders: A Tale of Sea and Steel, is a Viking-era novel focusing on the life, adventures and discoveries of Leif Erikson. It is loosely based on Saga of Erik the Red and Saga of the Greenlanders, but given that these are only basic outlines, so to speak, rather than precise records, I had a lot of room for my imagination to run wild while writing. Therefore, the book consists of events that had probably happened, events that might have happened, and events that most likely had never happened.
This is a tough choice, but in The Greenlanders, my favorite character is probably Freydis Eriksdottir, Leif’s sister and a very feisty lady according to the ancient Icelandic sagas. A friend who had been one of the beta-readers for the book commented that, while Leif Erikson is supposed to be the main character, during long plot stretches he is actually more of a backdrop to Freydis’s story. And this is true: Freydis has a knack for elbowing her way in and doing just what she wants. She is proud, arrogant, ambitious, but at her basic core her intentions are good.
I am currently working with Mason Marshall Press on my new sci-fi dystopian series, the first book of which, Wild Children, is due to be released soon. The book is set in a post-global-war world where the government seizes control of reproductive freedom, supposedly for the greater good, and severely penalizes families for having illegal children. The plot was inspired by the Chinese population control policy. I sat down one day and asked myself, “Could this happen in the Western world, and under what circumstances”?
Where can we find you online?
Blog: hannahrossfantasy.blogspot.com
Facebook: https://www.facebook.com/HannahRossFantasy/
Amazon: https://www.amazon.com/Hannah-Ross/e/B01KR0WN9S/
Goodreads: https://www.goodreads.com/author/show/14191911.Hannah_Ross 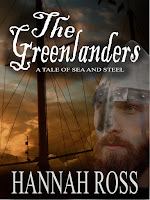 The year is circa 1000 A.D., and the battle between the old Gods and the new is at its height in Norway when the explorer Leif Erikson receives unexpected summons to court. Leif thinks this might be an advantageous opportunity to promote the status of his father's colony in Greenland, but between the intrigues of his sister Freydis, the greedy schemes of the king, and his fatal attraction to the beautiful Princess Thorgunna, it becomes uncertain whether he will make it through alive.

Spanning three generations of seafarers, colonists and adventurers, The Greenlanders brings the ancient Icelandic sagas to life and illuminates them from an unexpected angle.

Thorvard strained against the ropes that bound him to the mast. His fury could not find release even in a shout, for his mouth was gagged. All he could do was stare helplessly at how his few loyal men were bound as well and dragged aside, while the rest scurried like rats to do Freydis’s bidding. Weak treacherous cowards. They will regret this.

He made sure to remember each one – how they moved, spoke, looked. He would deal with them as soon as opportunity presented itself, and he would not be forgiving.

“I’m sorry, Thorvard,” she said, but her expression was quite the reverse from an apology – it exuded arrogance, defiance and triumph. “Once we do what must be done, I’ll release you. You’ll see that I was right. Raise the sail, men. We take course southwest.”

Nobody asked where they were headed. Thorvard knew it as well. Vinland.

It was sheer madness. It would be the death of them all. The Skraelings would finish them off with a flick of a finger, given how few capable men were on the ship. But with me out of the way, who is left to beat some reason into Freydis?

Thorvard remained bound to the mast like a misbehaved dog for many hours. Bitterness, pain and fury left no room for hunger, but his throat was parched and his tiredness soon began to kick in. His legs trembled as he leaned against the mast for support. The ropes were too tight to allow him room to sit, and he wondered how much longer he would be able to hold on before he slumped unconscious with exhaustion.

“Nod your head if you promise to be quiet, and I’ll take this gag out of your mouth and give you a glug of beer,” Erlend, a weasel-like balding thin man, said with a nasty leer. Thorvard never trusted the bastard, and glared at him with a murderous expression, not moving his head an inch. “Suit yourself,” Erlend shrugged and moved away. Freydis didn’t return to look at her vanquished husband again. She was up front, giving directions to the men.

She wants to go back to Vinland to avenge Helgi, Tur and Gudrid, but she is deluded. We are too few. Will Valhalla admit those who seek death in so foolish a way?

A futile effort to find a more comfortable position offered Thorvard an unexpected sliver of hope. There was a splinter on the other side of the mast, just where his bound hands were pressed. The ropes snagged on it. Thorvard attempted to rub the ropes against it, straining them at the same time. He had nothing to lose. His movements were small enough to go unnoticed. A half-hour of such strained, painful chafing rewarded him with a slight loosening of the rope. Thorvard kept working away, every muscle in his body quivering with weakness and pain and tension. A stubborn strength came from somewhere and didn’t let go. He kept straining. A gale rocked the ship, splashing him in the face with salty water, but though it drenched him and stung his eyes, Thorvard didn’t care. Odin, Father, let me get out of these bounds before it’s too late.

If you like what you've read, comment below. Also, the book can be purchased at the link.