Yesterday, we met Deborah Stevens. Today read an excerpt from The Serpent's Disciple. If you enjoy what you read, be sure to comment. 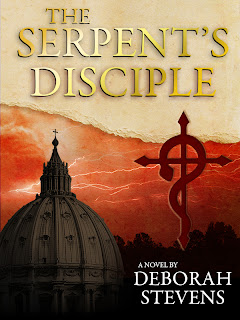 Father Anthony, born Fernando Martins de Bulhoes, had just finished with his nightly prayers. Tomorrow, he and the young Giovanni would prepare the church for people to come and hear the Bishop from Rome speak about the Crusades.
The bishop was Pope Honorius III’s special envoy. Because of the troubling state of affairs in Italy, the threatening attitude of the Tatars, and the fear of a schism, he was being sent to villages like theirs to inspire and recruit people to join the fight. In 1215, the Pope issued the Papal Bull “Ad Liberaindam” calling all Christendom to join the Crusades. His wish was to reacquire the Holy Land and Jerusalem.
Anthony heard a light rap on the door to his room and someone softly whispering.
“Are you still awake Father Anthony?”
“Giovanni is that you? Yes, come in, my son.” Giovanni’s father and mother had brought him to the monastery when he was 12 years old. Since then he had grown to be a tall lad, slender with dark wavy hair and warm dark brown eyes.
During the last six years the monks became his family and in exchange for helping around the monastery, he was taught to read and write, turning out to be an excellent student.
“I’m sorry if I disturbed you father, but I couldn’t sleep. I keep thinking about the bishop coming the day after tomorrow. Do you think the war will end soon?”
“Only our Heavenly Father knows the answer to that question. We can only pray on it and ask for the strength to follow the Lord’s will.”
The priest could tell Giovanni had something else on his mind.
“There’s something I wanted to give to you Father. I have been working on it for months, and I finished it a few nights ago.”
Father Anthony watched as Giovanni brought something wrapped in a brown piece of cloth tied with a string, from behind his back. As he untied the string, the fabric fell away, and he held in his hands a beautiful wooden box.
“I made it to thank you for teaching me to read and write. I hope you like it.”
The priest held the box in his hands and saw that it was quite unique in design.
“Giovanni, I don’t know what to say. We’ve been blessed having you here at the abbey. When you found the time to make such a beautiful box I will never know, but I will always treasure it. One with such devotion is surely one of God’s Chosen Ones. You will be a good servant to those who want to learn the faith.”
Giovanni was fidgeting as the Father spoke.
“Please Father Anthony, may I have it. There’s something very special about the box I want to show you.”
Curious to see what Giovanni meant, the priest handed the box back to him.
“First, the key to lock the box is inside, see.”
Then he continued to explain to Father Anthony the secrets of the box.
“Giovanni, what a genius you are. I must pass your gifts of artistry on to the bishop. Perhaps they will have need of someone with such a gift in Rome.”
“My only wish was to please you, Father Anthony. I am so happy you like the box. Whatever God has planned for me, I will work to please Him the best way I know how but I must tell you a story about the box.
“I was working in the fields a few months back and was trying to think of something I could do to thank you for teaching me to read and write. A monk I had never seen before was also working in the fields that day. When it came time to stop for the midday meal he came over to me and offered to share his.
“He had packed more than he could eat, and a young lad like me, he was sure, would be able to eat more than what was in the small pouch I carried. As we ate, I told him I was trying to come up with an idea for a gift to thank you for all you have done for me.
“He said he knew of you and was sent to tell me to make a box that could keep a secret safe from others’ eyes. I did not understand why it must hide a secret but he was so kind and wise of a holy man that I promised to create something special. I thanked him for the meal and went out to the field to finish my work. At the end of the day when I looked for him he was gone. I’ve never seen him again. I said a prayer that night and thanked God for sending me the messenger and that I would fulfill my promise both to Him and the monk I met in the field that day.”
Father Anthony did not question God’s ways. He would accept the box from young Giovanni as a gift of kindness and great effort. If there was a purpose for the box he knew that he would be shown it when the time was right.
“Dear Giovanni, though I would like to hear more about that day in the field, we must get our rest. We have much to do tomorrow to prepare for the bishop. Bless you, Giovanni, for your faith and kindness, and thank God for the gifts he has honored you with. Let us say a prayer and then we must get our sleep, for the morning will be here before we know it.”
CHAPTER 2
September 28, 1978 The Papal Palace

Cardinal Jean Villot, Vatican secretary of state, had gotten hold of the list of appointments, resignations to be asked for, and transfers Pope John Paul I planned on putting into motion the next morning. There was one common denominator that linked each of the men about to be replaced … it was Freemasonry.
Villot was aware of each man’s affiliation to the Masons; more important, so was the Pope. It was the reason the Pope would strip these men of their power.
Pope John Paul I had evidence indicating that within the Vatican City State, there were over one hundred Masons ranging from priests to cardinals. The Pope was further preoccupied with an illegal Masonic Lodge called Propaganda Due (P2), which had infiltrated far beyond even the Vatican in its search for wealth and power. The fact that it had penetrated the Vatican walls and had converted priests, bishops, and even cardinals made P2 anathema, a formal ecclesiastical curse accompanied by excommunication.
The changes the Pope was intending on making would create, by any standards a dramatic reshuffle within the Vatican. It would set the church in a new direction, directions that Villot and others on the list considered dangerous for their movement.
On the morning of September 29, 1978 at 4:45 a.m., Sister Vicenza entered the papal apartments to bring the Holy Father his morning tea, only to find the lifeless body of the Pope. Fifteen minutes later at 5:00 a.m. it was reported that Cardinal Villot confirmed the death of the Pope. Only thirty-three days after his election, Pope John Paul I was dead.
Sister Vicenza gave two conflicting reports concerning the state in which she first found Pope John Paul I. According to a group of French priests that same morning, it was “in his bathroom” that she found the Holy Father dead, still in his papal robes. Later, after Cardinal Villot was present, she reported that upon entering the room she found the Pope sitting up in bed “with an expression of agony” before he died.
This small detail is significant. If it was true that Sister Vicenza found the Holy Father dead in the bathroom still in his papal robes, it could be construed that he died shortly after his “toast” with Cardinal Villot, the night of September 28, 1978.
That evening Villot hastily arranged for the embalming to be performed, a procedure as unusual as it was illegal, Villot also insisted that no blood was to be drained from the body, and neither were any of the organs to be removed. No official death certificate has ever been issued. No autopsy ever performed. Cause of death: Unknown.