Yesterday, we met author Christine Meunier. Today read an excerpt from her novel, Horse Country. If you like what you read, please comment and buy the book. 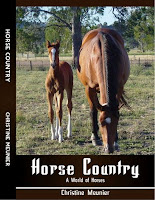 Christine Meunier has lived a life breathing, dreaming and working with horses in the thoroughbred industry in and has also travelled overseas to work in the industry.  Horse Country takes her own personal experiences woven into a story about four young women studying and working in the horse industry.

Follow Lise and Wes as they work their way around North East Victoria, Australia in the seasonal world of breeding thoroughbreds.  Horse Country follows the seasons of the thoroughbred industry and what the day to day of working on a stud could look like.

A few hours away, Maddie and Melanie are working hard in their parent’s metropolitan riding school, teaching others about horse riding and care of the horse.  From the nervous first time rider, to the child who wants to run fast and jump high, the young women shape lessons to suit the individual.

Horses offer a great opportunity to study, learn, work and develop an incredible career around the world.  Set in , this novel shows that the land down under is indeed a Horse Country.Horse

"Watch this here filly.  I think she's just slightly over having had IV needles for the past three days," Declan warned, holding the young animal as Lise pulled the cap off the needle.

"Well, you'll just have to save me if anything goes wrong," she commented dryly, expertly putting her thumb to the equine's jugular groove, inserting the needle smoothly into the vein and pulling back with the syringe, noting with satisfaction the red liquid that coloured the small tube before administering the previously clear liquid.

Declan was slowly becoming impressed with Lise.  He’d seen a lot of her over the past week as any work that had required two; Trevor had made some poor excuse to not help but not so surprisingly, always seemed to know what Lise was up to and where she could be found to help.  Declan grinned as he realised the older man’s plan was working.  A figure came to stand in front of the box the pair were working in, his body blocking out the light as he peered in curiously.  Declan rolled his eyes at the sight of the older male's sudden interest as his gaze fell upon Lise.

"Well hello gorgeous!  Why doesn’t anyone tell me when we get a new worker?  I don't believe we've met.  I'm Tony.  And you are?" he questioned as she brushed past him out of the box.

"Uninterested," Lise commented dryly, never taking her gaze off the treatment chart she had picked up to fill in.

Still in the box with the sick yearling, Declan chuckled softly, amused at her bluntness.

"What have the others already told you about me?  It's all a pack of lies, I promise you," Tony commented, winking at her.

"So you being found hung over in Declan's bed wasn't really a mistake?  The girls swore it was," she stated sincerely.

"I… what?" he asked, suddenly confused.

Declan thrust his hand over his mouth, barely managing to contain the laughter that was now coming out in bursts.  This girl knew exactly how to treat males like Tony… and pick them it appeared, as he was sure she hadn't yet been warned about the sleazy stud hand.  The female staff hadn’t exactly taken a liking to Lise, something he found surprisingly appealing.

"Give it up Tony, she knows about us.  I guess everyone does," he commented as he exited the box, sighing dramatically to add emphasis to his statement.

Lise grinned as the young Irishman winked at her before strolling down the breezeway whistling YMCA.  Observing the whole display from the other end of the stables, Trevor shook his head, grinning wryly.
"I should have made that bet fifty bucks," he muttered, entering the next box with a full hay net.

The young woman sat down at the end of the day, her back resting against a stall door.  The second week in April marked the start of the school holidays which for her meant two weeks of work experience at an impressive looking racing property.  Her mother had dropped her off early that morning and now at the end of her first day, she was going back over things she’d seen and learnt while waiting for the same parent to come and pick her up.
She chewed on her pen thoughtfully as she opened up the small notebook she’d been carrying in her back pocket on her mother’s suggestion.  This way she could make notes while the day was fresh in her mind, making her diary report for school that much easier.

The horses are kept on straw in boxes which is around 20 centimetres deep (not to be exact, or anything) and it’s even higher around the edges.  Supposedly, the higher walls are to stop the horses from getting cast.  That is, stuck in their box and unable to get up.  Making them sound pretty stupid animals, isn’t it?  But, I’ve been told that when a horse rolls it’s possible for them to get stuck, especially in the corner of a box and this extra height around the walls either keeps them away from the corners, or perhaps it gives them something to scramble up on?  I haven’t worked out which, yet.

Routine for the day – visit the horse boxes, search for horse poo (can you say “yay”?); remove the wet straw (read: empty the whole box); replace with new straw and in the afternoon do another poo hunt, removing this.
In between is the constant emptying of water buckets, cleaning out and refilling each one before replacing.  I believe this resulted in me having at least five impromptu showers and that was just in the morning.  Must fill buckets less…

After the poo and water madness, feeds are made up consisting of chaff and many other feedstuffs I don’t yet recognise… oh, and a good amount of hay that is supposed to go into hay racks well out of my reach.  Many a wash due to water buckets and then getting covered in bits of hay!  Think I got those two round the wrong way…
Currently occupying the stalls are thirteen horses, seven bays, four chestnuts and one gorgeous roan.  I wonder if they’d notice if I put her in the car and took her home?  Oh, and the coolest thing so far?  One of the chestnut horses is worth $250,000.  A quarter of a million dollars!  And they let me brush him and pick horse poo out of his feet.  The best, huh?

She paused from her writing with a smile, looking back down the breezeway of the stables.  Her grin widened as she heard the crunch of gravel under tyres.  Mum’s here!  Wait till I tell her about my day!  Calling out a goodbye to her boss she ran toward the car, flinging the door open with a grin, not even giving her mum a chance to ask about her day before she started relaying every little event.  Her mother listened with a smile, driving them both home.