This week's guest author is Nastasia Peters, author of Altors. Read all about her, and remember to return tomorrow for a sample of her work. 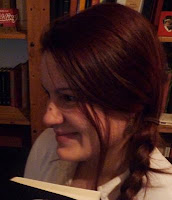 Tell us a little about yourself?

I was born in the Netherlands and moved to France when I was 14. That change sort of triggered my need to illustrate, to read and eventually, to write. I live in a pretty full house somewhere in the region called Brittany. I read in my car. I have three dogs, several cats that pretend to be eternally hungry, and I have view on the sea. I have this fun thing where in English I have an accent that is neither French nor Dutch, but to British people I sound American, whereas to American people I sound British. In Dutch I have a very light French accent, and in French I apparently sound like I come from the north.

To be honest I don't fully grasp the fact that I am one yet. I thought I'd really get it once I'd hold my book, but it just helps me wrap my head around the idea that I wrote a story, more than I am writer. But I write because I don't want to forget the stories that are in my mind, and I find that writing them down makes me happy. So I suppose I wanted to become a writer because it's an activity, or a passion really, that gives me a sense of accomplishment and joy nothing else can give.

Could you tell us a bit about your most recent book and why it is a must-read?

Altors takes place in a mythical world where the people suffer from an underground war. Those that fight in it are under the impression it'll never end, and then there are those who are completely unaware of the political uproar hanging above their heads. It's a very corrupt place and like anything, no matter how complicated something is, there's always a silver lining and some kind of solution.

In this case, the main characters, Calycanthus and Solenum are the silver lining and help the supporting cast find the solution to end the war. It's very accidental; they were never supposed to uncover these secrets, but after the death of their guardian, they are separated for safety reasons. So as they try to find their way back to one another, they uncover lie after lie and essentially puzzle everything back together. As they do so, they also find out who they are, where they come from and just how much was kept from them.

I believe people should give it a shot as there is something in it for everyone. Anyone can find something they can relate to and that creates a connection. There's also a lot of fighting, back stabbing, joking around, friendships, some I love you's and plot twists going on which anyone who loves a little bit of adventure and fantasy can enjoy.

What gives you inspiration for your book?

RPG fantasy games and a number of songs, sounds and landscape views from around here.

Completely made up. Although I'm sure there are traits in each character that may resemble that of a friend, family member or a past acquaintance,  but there is definitely not a character in the book that i a carbon copy of someone I know. Personally I believe it would be hard for a writer not to use what they've seen, experienced and known in their stories; it happens subconsciously. But, any resemblance to people I know or anyone may know, is strictly part of the reader's imagination.

That's a tough one. Solenum is so incredibly brave, but fearless to a fault. Calycanthus, on the other hand, has more of a tendency to take a step back and make sure everything is save before taking that step forward, which I love, but hate at the same time because sometimes he takes too much time to think. I would go with one of the main characters, but I actually think they are made better and more thanks to the characters that surround them.

In the first book I believe my favorite character would be Isa Ryder, a Ranger/Pirate that doesn't believe in honorable fights and has no issue stealing the girl away from the hero with trickery and deceit. He always pops up at the wrong times and never fails to disrupt whatever it is the main characters are doing. He's an annoyingly lovable character.

At first everything seems so easy, but then you're faced with all these issues that have evil spawn in every which direction. I can't tell you how often my eye has broken out into an awkward twitch when staring at my plot line or when a character isn't behaving the way they should and I try to understand how I, myself, managed to do that. It's this big web that is so fragile, and if you cut the wrong cord, everything falls apart.

Is there any particular author or book that influenced you in any way either growing up or as an adult?

The Neverending Story by Michael Ende. It got me through a lot of heavy moments in my life, and I could really relate to the character, the way he locked himself away in the attic to be able to read the book and let the world around him fade away. It's a lovely story, and I can read it again and again.

Do you have a day job in addition to being a writer?  If so, what do you do during the day?
I do, yes. I'm a reviewer on a graphic media website, and I do freelance illustration on the side along with some tutorial writing (on illustrations). My days consist of doing my job as a reviewer, writing, editing, keeping up with the promotion and marketing of Altors, the first book, and then whenever I have some free time, I'll play a game or draw.

I love quotes, and there are some really good ones about writing out there. So I will give you my top three.

Writing is easy; all you do is sit staring at a blank sheet of paper until the drops of blood form on your forehead.
- Gene Fowler

To know is nothing at all; to imagine is everything.
- Anatole France

Tell us a little about your plans for the future.  Where do you see yourself as a writer in five years?  Do you have any other books in the works?

This may sound dark and what not, but I've learned not to look too far into the future as things always change. I'm not saying that living day by day without making any plans is the way to go, but five years is too far ahead of me. So I honestly don't know where I'll be. I hope I'll still enjoy writing as much as I do today.

As for other books. Regius, the second installment in the Zinc trilogy is to be released in a couple of months and Seers, the third installment, is being worked on as well. I have several ideas for other stories that I may write, but I want to give Zinc my full attention for now.