Gabrielle Mathieu lived on three continents by the age of eight. She’d experienced the bustling bazaars of Pakistan, the serenity of Swiss mountain lakes, and the chaos of the immigration desk at the JFK airport. Perhaps that’s why she developed an appetite for the unusual and disorienting. Her fantasy books are grounded in her experience of different cultures and interest in altered states of consciousness (mostly white wine and yoga these days). The Falcon Flies Alone is her debut novel.

1. What are your biggest literary influences? Favorite authors and why?

When I was eight, I read Tolkien’s trilogy, which made me incapable of normal kid conversation for a couple of years. Who can play with a Ken doll when you’re longing for Aragon? As the years went by, I began to view Tolkien as a product of his times, stilted in some respects. I’m impressed by the low fantasy world George RR Martin crafted, which seems appropriate for modern times, but I’ve had to stop reading because of the grisly flayings. I would say they both influenced me, and I stand between the two poles: absolute brutality and abstract idealism.

2. What are you reading at the moment? Would you recommend it to readers of this blog? Why?

I’m reading Aliette De Bodard’s The House of Binding Thorns, as preparation for our kickoff interview on the NBN Fantasy channel. The podcast should be available on April 6th or 7th, so drop by http://newbooksnetwork.com/category/arts-letters/fantasy/. The novel, the second in her series, is heavy on atmosphere. This is Paris like you’ve never imagined, a ruined battleground where fallen angels vie for power, and allegiances are made and broken. Aliette lives in Paris and has used her knowledge of the city to create a spell-binding environment.

3. Tell us something about how you write? i.e. are you a plotter or a pantser? Do you have any weird or necessary writing habits or rituals?

I’m in neither a plotter or a pantser. I usually have a good idea how I want the novel to end and what locales it takes place in. After the first draft, I’ll plan to a trip to the country to nail down details. This will be challenging once I start my epic fantasy series though since it’s set in another world. I like to write while I listen to music. I’ve got a play list up at http://gabriellemathieu.com/inspirational-music/.

4. Could you tell us a bit about your most recent book?

My heroine, chemistry nerd Peppa Mueller, falls prey to an unscrupulous anthropologist who tricks her into drinking a hallucinogenic potion that changes her life forever. But Peppa’s no victim. Soon she’s locked in a power struggle that threatens her chance at love, and maybe, her sanity.

5. What gives you inspiration for your book?

The Falcon series was inspired by a whopping nightmare. When I was in my twenties, I didn’t just have run of the mill nightmares. I had detailed vivid dreams, during which I even felt pain or smelled strange smells. My lifestyle, hanging out with musicians and experimenting with various substances, fed the tendency of my night time psychic wandering.

6. Do you have a day job in addition to being a writer? If so, what do you do during the day?

I have three day jobs! I earn a monthly regular income working in the high-tech environment of a laboratory testing human blood and body fluids. This information includes parameters such as cholesterol, but there’s so much more. In 2001, I received a Master’s in Traditional Oriental Medicine, so I also see private clients and help them with acupuncture, massage, and herbal prescriptions. Just recently, I also began translating a book from German to English. Being busy spurs me on to being productive.

7. Tell us a little about your plans for the future. Do you have any other books in the works?

The Falcon Strikes, the second in the series, is coming out this July. It takes place in Ireland, against the background of the IRA’s campaign against British rule. Once again, Peppa tries to carefully plan a strategy, but ends up involved with a handsome young paramilitary and in trouble with both sides of the political spectrum. Then there’s the secrets her Grandmother’s been keeping.

8. Where can we find you online? 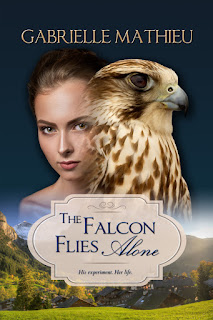 As the sun rises on a quiet Swiss mountain village in 1957, runaway Peppa Mueller wakes up naked and stranded on the roof of her employer’s manor, with no idea how she got there. As she waits for help, she struggles to piece together fragmented memories of the previous night. Did she really witness the brutal massacre of a local family? Did she kill them? Her fear of sinister house guest Dr. Unruh fuels her panic—as do electrifying flashes of a furious falcon, trapped inside her.

Wanted for murder, Peppa flees the police, intent on finding out if there’s a scientific explanation or if she’s just going mad. Her godfather, world-renowned chemist Dr. Kaufmann, risks his career to help her. In the meantime, Peppa fights her attraction to the handsome priest from India who offers her shelter. With their help, she not only finds Dr. Unruh but places herself at his mercy. His experiments may be the reason Peppa now shares her body with a bloodthirsty bird of prey—but the revenge she plans could kill them both.

I took out the illustrated book about birds of prey, wondering if Silvia had been researching hawks because of Horus, the hawk-headed god. I flipped idly past owls and vultures, until I came to the sections on falcons. A full-page illustration of a peregrine caught my eye.

She was buff -colored with gray barring along her legs and chest. The head was slate-colored, her eyes large and profound, the darkness of them more pronounced by the light rim around them. The artist had captured her in full flight, her wings outspread and the tail feathers fanned around her tucked claws.

A stab of yearning—where was she going?

Seconds passed, then minutes. I couldn’t look away from her. A conviction seized me that if I looked into the mirror, I would see her curved beak and piercing eyes instead of my homely features.

I could not face my reflection. Instead, I forced my trembling hand to graze my nose, my cheeks, my eyelids. Familiar. Ordinary.

I slammed the book shut and pushed it to the bottom of the satchel.

Gabrielle Mathieu will be awarding a $20 Amazon/BN GC to a randomly drawn winner via rafflecopter during the tour.

a Rafflecopter giveaway
Posted by Unknown at 1:00 AM