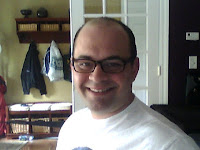 Tell us about yourself

I live in Cincinnati, Ohio, and manage a nature shop for my parents.  I’m married with three boys ages 10, 7, and 10 months.  We also have a dog named Scooby Doo.  My wife has a career, so I keep busy with the boys and my own job, but I write whenever I can fit it in.  I’m a big baseball fan and also took up guitar about two years ago.

When did you decide you wanted to be a writer?

I think I’ve wanted to be a writer for as long as I can remember.  I’ve placed Author above Astronaut, Doctor, Pro Athlete, and Rock Star my whole life.

How did your decision to write change your life?

For me, it gives me that sense of purpose that is so often talked about.  I rarely feel like I should be doing something else when I’m writing.

Where do you get your ideas from?

I take general themes of history such as trade, social uprising, and class society and transform it into a fantasy history lesson.

Tell us about your most recent book.

Doctor Lane Bravo’s Lectures on Bervin ‘The Blue’ is Dr. Bravo’s first lecture in a series, which is sponsored by the Galaxy Program of N.A.S.H. or North American Space Headquarters.  Dr. Bravo, is the Director of the Galaxy Program, and it is his job to record the most important events in the history of the Galaxy.  N.A.S.H. has given access to a time traveling Light-surfer for the project.  This first bit of history is the story of Bervin ‘The Blue’ of the planet Kelner.  Bervin is given the daunting task of retrieving the Common Sense Stones of his young planet. Dr. Bravo, not being able to interview Bervin himself, obtains interviews with the Village Elders, Kanka the Lone-dweller, Jippy the fishing captain, the Iaya Sisters, and and others.  He couples them with Bervin’s own journal from his journey in order to bring the most accurate account of this history possible.
As Bervin gained possession of the Common Sense Stones, his senses along with the rest of the planet’s became heightened to a level of awareness that had not been obtainable before.  There was a price, however.  Bervin’s actions raised the Brietta Mount, which cast massive amounts of dust into the atmosphere.  The raising of the Mount caused Sunlight to ricochet through the diamond Mountain and cast Blue over the  otherwise colorless sky.  It’s massive upheaval also fractured the lone landmass of the planet and created the first mountain range.  With the newly added dust in the atmosphere, clouds were formed and the four seasons were begun.  With the storms came the lakes and rivers, and Kelner was transformed.

Do you have another book in the pipeline?

Yes.  I am finishing the editing process on Doctor Lane Bravo’s Lectures on Andl Zenl.  It is Bravo’s record of a miner from the Ornario Asteroid Belt.  His history is considered noteworthy because he was able to move asteroids through open space closer to one another in order to create a trade alliance between their inhabitants.  His actions helped avoid war and transformed the social dynamics of the three asteroids forever.  I hope to have it out this year.  I am also working on the third installment of Dr. Bravo’s Lectures.  Those are concerned with the history of the Turtle Queen of Torrell, Cyntmort.  She blew up a star.

What are your favorite books?

The Lion, the Witch and the Wardrobe by C.S. Lewis, A Spell for Chameleon by Piers Anthony, and White Fang by Jack London are some of my favorite books.

Who is your favorite author and why?

That is an easy one!  C.S. Lewis is by far my favorite author.  He wrote like I aspire to write,  A great lesson within a great story.

Visit Chris at his website: http://www.doctorlanebravo.com/
Posted by Unknown at 3:00 AM