Yesterday, we learned a few things about writing comedy from the hilariously comedic author, RJ Leahy. My review of his novel Fat Chance and an excerpt from the novel follow. (Unless otherwise noted, novels reviewed on my site were given to me by the author in exchange for an honest review.) Leave a comment and tell us what you think. 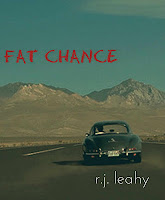 Sean McDermott is a private detective in New York City, it says so right on his business card. It's on ok job, but it isn't as exciting as most people think, and that's fine by him. He makes it a rule not to get involved in active police cases or in any case where people are likely to get hurt--especially him. So why does the mob suddenly want him dead? Sure it's all a mistake, but dead from a mistake is still dead.

Taking advice from his friend, The Juke, he starts on a cross country drive to LA (what can I tell you, he has a few phobias, and flying is just one of them), and makes it as far as Mystic Falls, New Mexico before the borrowed Mercedes conks out. Mystic Falls? Think Green Acres--without the sophistication.

All he had to do was lie low and wait for the car to be fixed. A good plan too. It might have worked if only the local "character" hadn't turned up missing, with him as the prime suspect. Now if he ever wants to get out of this sleepy desert asylum, he's going to have to find her. Fat chance.

I gave Fat Chance five out of five stars. It is the best book by an indie writer I've read so far.

Fat Chance is a hilarious adventure from start to finish. Sean McDermott is a snarky New York detective who finds himself stuck in a small New Mexican town and forced to solve a missing person's case, in which he becomes the prime suspect. He meets a host of interesting personalities from the waitress at the diner who tells him of course he shouldn't have ordered eggs if he's allergic to peppers to the older Asian woman whose Cadillac has been altered to drive only under 40 mph to the mechanic whose name is Not Jim. The novel kept me up at night wondering what the oddball characters would do next. McDermott's dry wit is riotously funny, and the mystery keeps you guessing and has a satisfying conclusion. I highly recommend Fat Chance to anyone who enjoys humor or a good mystery.