Russell Proctor, speculative fiction from Down Under

My guest today is a writer from the great continent of Australia.

A skeptic and futurist, Proctor has examined the methods and ideas of science and pseudo-science in his novel Plato’s Cave, which satirizes humanity’s endless quest for meaning in life and conflicting beliefs about the nature of reality. His professional acting days included working in film, TV and stage productions. He has also written and directed plays and musicals. He is currently completing a horror/sf time-travel series and a fantasy set in a Victorian music hall. Further information about him and his work can be found at his website, www.russellproctor.com.

I am an Australian writer, but have also been many other things in my working life, including a lawyer, teacher, professional actor, medical project manager and even a pizza delivery boy. At present I’m semi-retired, tutoring school and university students in the evenings and writing during the day. My interests include hiking, astronomy and cats. I’ve travelled extensively throughout the world, preferring out of the way places to modern civilization, for example I’ve visited Antarctica, walked the Kokoda Track in Papua New Guinea and climbed Mount Kilimanjaro in Africa. I don’t describe myself as a thrill-seeker, but certainly prefer my travels to include adventures rather than just “tourist traps.” My professional acting days included working in film, TV and stage productions. I have also directed musicals and written plays and poetry.

My three favourite authors would have to be Roger Zelazny, Mervyn Peake and William Hope Hodgson. All three weren’t afraid to test boundaries. Zelazny was a master of dialogue and had the rare ability to create believable god-like characters. Mervyn Peake, being an artist as well as a writer, had an amazing visual flair that crosses over into his works. Hodgson was a flawed genius. He even makes a cameo appearance as a character in one of my books.
Other books I’ve been profoundly influenced by include Herman Melville’s Moby-Dick which has always haunted me with its power and the way the rambling style of the writing so suited the story. Also Wuthering Heights by Emily Brontë, which has to be one of the most misunderstood books of all time. The Alice books by Lewis Carroll and the Oz books by L. Frank Baum have also played a big part in influencing my writing.
You’ll note that living authors don’t seem to make my list. They do, but these are the big ones.
I am definitely a pantser. I’ve tried plotting, and it’s never worked. I get ideas as I write. Sitting down and trying to think up what happens next just doesn’t seem to work for me. It means I have to do a lot of revising and sometimes whole chunks of stuff get cut, but it seems to come together in the end. I like the process of finding out what happens in the story as it’s being created, almost like I’m a reader myself. As for writing habits, I can only write in the mornings when I’m fresh. I try to do at least 1000 words a day or the equivalent in editing. In the last three days I write almost 10,000 words because the ideas just kept popping. But that rate is rare. I usually write with my cat on the desk. He insists on sitting there.
My most recently released book is The Looking-Glass House, which is the final instalment of a trilogy called The Jabberwocky Book about a grown-up Alice in Wonderland and Dorothy from the Wizard of Oz fighting supernatural forces in Edwardian London and World War One. It takes material from the original books about these characters and points it in a fantasy-horror direction. Definitely not the childhood heroines from the original books, but based on them. In The Looking-Glass House Alice must learn about her own childhood and discover the truth about the day a don from Oxford University told her a story on the banks of the Isis River, which was of course when Lewis Carroll made up the original Alice in Wonderland story and told it to the real Alice Liddell. For her part, Dorothy Gale from The Wizard of Oz is more of an action hero, trapped behind enemy lines on the Western front.
They are all pretty special to me in different ways. One thing noted by other interviewers is all of my main protagonists are female. I find writing female characters much easier than males, although of course there are an equal number of male characters. Probably my favourite character is whichever one I’m writing at the time. That’s a banal thing to say, but when I’m writing, I am deeply concerned to make my character someone special. I do have a soft spot for Dorothy Gale from my Jabberwocky Book series but also for a character from a work-in-progress called Mags. She is short, a bit chubby, wears a mix of men’s and women’s clothes and doesn’t take nonsense from anyone. Maddy Jervis from Days of Iron is an emotionally scarred fugitive who becomes a terrorist against her will. They all have something I find interesting about them, that’s why I created them the way they are.
I am currently working on a series about a synesthetic time-travelling lesbian cellist trying to rescue history from an invading alien horde. She is one of a race of people who can time-travel without a time machine, just by using their minds. Writing time-travel stories is hard, so I’m going slowly with that one.  I’m also putting together a novel about the ex-god Dionysus (god of the theatre among other things) running a vaudeville hall in Victorian London full of cheap acts and dubious reputations. Being an actor myself I’m having a lot of fun with that one. The idea of the God of Theatre himself actually running a theatre with all the usual management problems, dealing with egotistical actors and hecklers in the audience, trying to balance the books while at the same time saving the world from danger amused me and it’s been going very well so far.
Where can we find you online? (please cut and paste links):
Blog
Website
Facebook
Twitter: @proctor_russell
Goodreads
Inkshares

The Red King (Book 1 of The Jabberwocky Book) 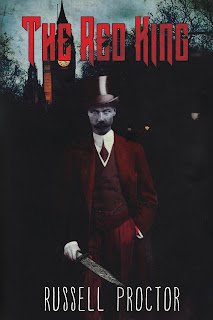 There is nothing deadlier than a little girl’s dreams.
Alice Liddell had adventures in Wonderland many years ago. Now she is grown-up, married and living a respectable life in Edwardian London. But her dreams have come back to haunt her.

A serial killer stalks the streets. Children and adults are being brutally murdered and drained of blood. The Red King is on a quest for revenge against the seven-year-old girl who humiliated him years ago.

Alice joins forces with Dorothy Gale, who had adventures of her own in a land called Oz. Together they hunt the Red King before he can enslave the world.

But Alice discovers that the Red King’s rampage may be all her own fault–
fighting her own dreams isn’t easy.

The Red King is the first of Alice’s adventures concerning the mysterious Jabberwocky Book she discovered in Looking-Glass Land, a book that holds the key to the survival of four linked worlds.

‘All right,’ he said. ‘What do you have to tell me?’
Alice drew her hands from the fur muff and tugged at the lower hem of her walking jacket nervously. Then she patted Dorothy’s arm again, as if to draw encouragement rather than give it.
‘I know who the killer is, Inspector. I don’t know where you might find him, but I know what he’s looking for.’
Lestrade reached for his pipe. It had gone out. He struck a match without asking permission and spent several moments puffing and sucking and getting the fragment of tobacco left in the bowl to light. Dorothy gave a meaningful cough as the smoke curled into the air, but Alice’s face remained impassive.
‘I presume, Mrs Hargreaves,’ he said after a while, ‘you’re not jesting now.’
‘It’s not something I feel is the least bit humorous, Inspector.’
Lestrade nodded and shifted the documents on his desk while Sergeant Wilson poised his pencil meaningfully.
‘Ultimately,’ Alice continued, ‘the killer will come after me. The Waif’s murder – it was merely practice, shall we say?’
‘May I ask, then, Madam, who the killer is?’
Someone she had a grudge against, no doubt, and wanted to make trouble for: a disgruntled husband or an ex-lover. Women were fascinating creatures.
‘He has no actual name I’m aware of. He’s called the Red King.’
The sound of Wilson’s scribbling pencil ceased. Lestrade glanced at him sharply, and tilted his head towards the door. Wilson stood up and closed the door carefully, then sat down again. The waiting room was full of people.
‘That’s an unusual name,’ the Inspector said eventually. ‘The Red King? Some killers like to revel in fanciful names. Jack the Ripper. The Brighton Fiend. Professor Moriarty. This one’s just as whimsical. May I ask how you thought of it?’
Alice hesitated, glanced at Dorothy again, who nodded. ‘I heard him called that, in a different world from this. He’s not English, but he speaks with no accent you’d recognise. I met his wife.’
‘She’s the Red Queen,’ piped in Dorothy earnestly. ‘And there was a White Queen as well and a White King, but they’re nice folks. Well, not nice really, just dumb I guess…’
Alice frowned sharply. Dorothy shut up.
‘Sounds like a chess game,’ chuckled Lestrade despite a feeling of growing disquiet. ‘I suppose you met these monarchs too, Miss Gale? Did you say hello to the Rook? Drink tea, perhaps, with the Bishop’s Pawn?’
The girl shook her head, completely oblivious to the sarcasm, her hair flapping against her shoulders. ‘Oh no, sir. I went to another place entirely. Across the desert. A land called Oz.’
‘Australia?’ Wilson spoke up suddenly. ‘I have a cousin there.’